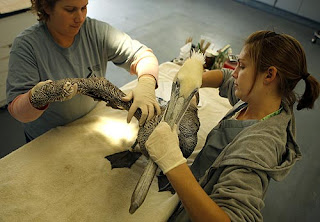 The ongoing discovery of scores of fatigued and disoriented California Brown Pelicans is causing concern among biologists and bird lovers, but yielding few concrete answers to what’s causing their condition.

Since late in December, the giant seabirds have been found in frail condition along highways and backyards, miles from their coastal homes. At both IBRRC bird centers, but especially at the San Pedro center, we’ve had our hands full treating these remarkable birds. There are almost 50 pelicans in care this week alone.

Writer Louis Sahagun and photographer Mark Boster of the Los Angeles Times collaborated to capture the concern for these pelicans:

Wildlife rescuers from San Diego to San Francisco suddenly are facing a distressing biological mystery: Disoriented and bruised California brown pelicans are landing on highways and airport runways and in farm fields, alleys and backyards miles from their normal coastal haunts.

In the last week, the big brown birds known for flying in formation over beaches have been reported wobbling across Culver Boulevard in Playa del Rey and on a Los Angeles International Airport runway. Two dead pelicans were found on the 110 Freeway. Elsewhere, one smacked into a car.

Learn how you can help us care for these birds: Adopt-a-Pelican

3 thoughts on “What’s causing fatigued pelicans to drop from sky?”