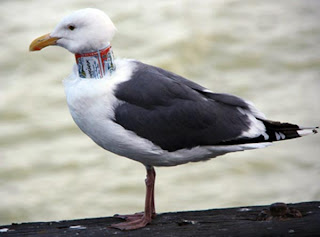 It has been confirmed by wildlife experts that someone is maliciously catching gulls (seagulls) and collaring them with cut beer cans. Thanks to reports by members of the public and birders, sightings have come in from San Francisco (Pier 39 and another juvenile gull at Lake Merced), Half Moon Bay and various locations around the Bay Area.

The two organizations collaborating on this effort, International Bird Rescue (Fairfield) and WildRescue (Monterey), are seeking the public’s help is locating the birds. They ask that instead off attempting to capture the birds, which can make them more wary and harder to catch, sightings should be reported immediately by calling (831) 429-2323 or emailing rescue@wildrescue.org.

“This is a federal crime punishable by severe fines, imprisonment, or both,” says Rebecca Dmytryk, with WildRescue, one of the groups spearheading this effort. The US Fish & Wildlife Services, who administrate the Migratory Bird Treaty Act under which this act is punishable, has been alerted to these incidents. 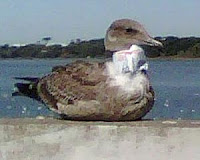 Through an anonymous donor, a $1,000.00 reward being is being offered for the arrest and prosecution of the person or persons committing these crimes. Anyone interested in adding to the reward should contact either organization.

Both organizations are recruiting members for their search and rescue efforts. Anyone interested in receiving training and volunteering as a rescuer should contact them through their websites: www.ibrrc.org or www.wildrescue.org