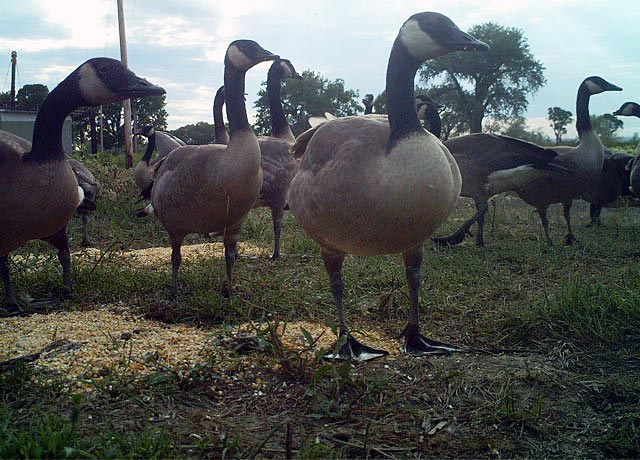 Lured by grain, a motion-activated camera was used to gauge the degree of oiling of this flock of Canada Geese.

How do you find a needle in a haystack? Or in this case, how do you capture two oiled geese in a flock of 60? Patience really is a virtue – and coupled with experience and ingenuity it’s paying off.

As the Yellowstone River slowly recedes (about 3 feet so far), we have gained more access to shorelines and adjacent areas. In a farmer’s field about a half mile downstream from the broken pipeline we spotted a group of 60 geese from the other side of the swollen river. We observed that about six of the geese had visible oil on them. 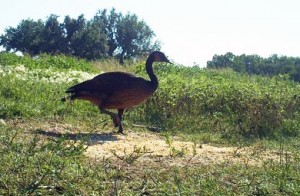 Two of these birds were what we consider heavily oiled, and at risk of succumbing to hypothermia if we did not capture them before fall when temperatures drop significantly. The other 4 had patchy oil on their feathers which we believe puts them at minimal risk, as it will likely molt out before the weather turns.

Our plan for capture of the heavily oiled geese consisted of creating a feeding station to attract them and setting a net launcher. The flock had been feeding in a relatively dry and open spot early in the day, and we visited the site every morning for a week to leave piles of grain and seed. We employed a motion-activated camera to obtain close-ups of the birds and gauge the degree of oiling on each. 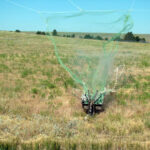 Dave Pauli of the Humane Society of the United States, a specialist in capturing and moving wild animals, connected us with Gerald Wiscomb, a local USDA, APHIS agent. Jerry had the Coda Net Launcher we needed. The gunpowder actuated 45’ x 20’ capture net is shot using four projectiles to rapidly spread the net over a target. We tested the system at the local airport and got familiar with its range and sound. Meanwhile, we set up a dummy version of the system at the feeding station so that the birds could get used to its presence.

On Saturday at 4 a.m., 7 International Bird Rescue staff, Jerry, Dave and Rocky Ortega from Exxon all met and drove to the site. Nine of us situated ourselves out of sight in the corner of a mosquito infested field a hundred yards from the feeding site, while Jerry hid in a small shack near the feeding site so that he could see when the birds were in the target zone. After two hours of waiting, he radioed that one of the heavily oiled birds was in the center of the target area and he detonated the launcher. We raced from our hiding spot to find the bird he’d targeted – and no others – in the center of the net. The system worked perfectly! 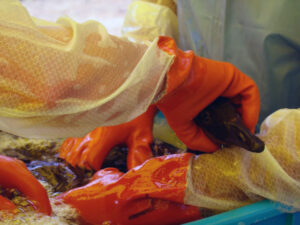 The goose was taken to our rehabilitation center downstream, and its exam indicated that it was in good health. It was given a day of rest to reduce its stress levels, and then washed on Monday. The goose did well in the wash, and is currently in an outdoor enclosure, waterproofing itself and eating. It will be released later in the week.

As the river recedes, birds are preferring safer sites like sand bars and islands in the river. Additionally, many raccoons and deer are enjoying the grain we put out. Therefore, our feeding site is not as enticing as it once was. The other heavily oiled goose has been shy and elusive, and had flown away before we launched the net. Since it was not present to be frightened by the detonation, we are keeping the feeding station going, but only a small number of geese are visiting it. At this point it is unsure if the oiled bird will come back, but we continue to monitor it and will keep you updated.

In the meantime, we continue to search for oiled wildlife and build important relationships with local professionals like Dave Pauli and Jerry Wiscomb who really made this bird capture a success. 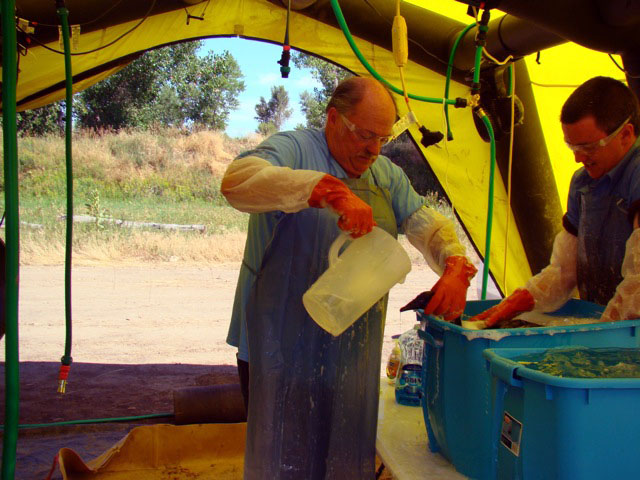