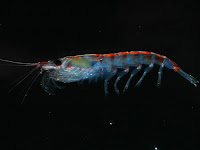 The outbreak of seabird deaths this spring and summer in Northern California has scientists turning their attention to krill and how some animals can adapt to changing foodstocks and others don’t.

In a story in the San Francisco Chronicle today, researchers are studying how the disappearance of Anchovies – that left diving birds like Cormorants starving – has affected other animals like humpback whales.

The whales adapt better and have turned their feeding attention to more krill, a type of shrimp-like marine invertebrate animal. Cormorants haven’t or can’t adapt to feeding on other forms of ocean food.

“We’ve had an extraordinary number of dead animals,” said Jan Roletto, the research coordinator for the Gulf of the Farallones National Marine Sanctuary. “It seems to be that the animals that suffered the most were the animals that forage on anchovies.”

Here at IBRRC we saw huge numbers of dead and dying Brandt’s cormorants along beaches in Central and Northern California. The birds can dive as deep as 300 feet for prey. According to PRBO researchers the birds did not produce any chicks this year on the Farallones or on Alcatraz Islands. This is compared to a total of 15,000 chicks in 2007.

According to scientists, the Cassin’s Auklet, a small seabird that feeds on krill, has had above-average nesting success this year.