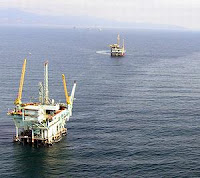 Three members of IBRRC’s oil response team have been dispatched to a small oil leak off the coast of Santa Barbara. At least 1,134 gallons (27 barrels) were reportedly spilled on Sunday, December 7, 2008.

No oiled birds have been found. On Tuesday team leaders from the Oiled Wildlife Care Network (OWCN) will help coordinate the search for possible oiled animals.

A total of 882 gallons that spilled has been recovered. The spill is near Platform A in the Santa Barbara Channel about six miles offshore of Summerland. The company operating the platform, DCOR LLC, reported the spill Sunday morning when workers noticed an oily sheen around the platform. See map below.

Platform A was the site of the massive January 29, 1969 oil spill. For eleven days, 3 million gallons of crude spewed out of the well, oil workers struggled to cap the rupture. Blown by winds and swells the oil created a 800 square mile slick. See history of spill

Following the 1969 spill, Earth Day was born nationwide. Many people consider the oil spill a major impetus to the modern environmental movement.