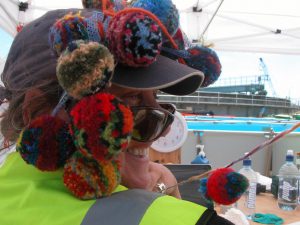 Editor’s Note: The work we do at Bird Rescue wouldn’t be possible without our amazing team of staff, volunteers, and board members! Read below to meet one of our stellar team members!

Ever wondered who’s responsible for deploying the troops when a spill arises? That would be our intrepid Response Services Team! Today’s Staff Spotlight features one of those team members, Michelle Bellizzi! Michelle is one of the primary points of contact in the event of an oil spill, both locally and internationally, and is the right hand of our Response Services Director, Barbara Callahan. She has been an integral part of the Bird Rescue team since 2000, and we are grateful to have her on board! Like any good responder, Michelle not only has a skill for multitasking and staying calm under pressure but in bringing levity and enthusiasm to any situation.

Michelle first started at Bird Rescue after a friend saw a posting on Craigslist about volunteering. Though she was employed in another field at the time, the self-proclaimed “non-volunteer type of person,” decided she would give it a shot. When she showed up to her first-day volunteering, the wildlife center was full to the brim with sick pelicans, which included the poop and vomit that accompanies them. As a newbie to the bird rehabilitation world, she was a little more than put off by smell and the mess that surrounded her. She wasn’t sure she would return –  that is until she got up close and personal with her first pelican. Michelle describes standing 5 feet away from the large and majestic bird, and at that moment she said, her heart melted, and she was hooked.

One day a weekend turned into two days a weekend, which turned into evenings after work, and eventually, Michelle found herself leaving her old career behind, and stepping happily into her new home. Starting as a technician, she has worn many hats over the years, including Center Manager and Volunteer Coordinator. While she misses the action of being in the clinic, Michelle appreciates her current role because of its ability to allow her to make an impact on a large number of birds at once.

When not at Bird Rescue, Michelle can be found snuggling with her parrot Gertie, spending time with her longtime partner Blake, or enjoying the many delights of the Bay Area. She loves California and enjoys exploring all of the beauty that it has to offer.

Thank you, Michelle, for all that you do! We are lucky to have such a funny, hardworking, and knowledgeable character on our team!