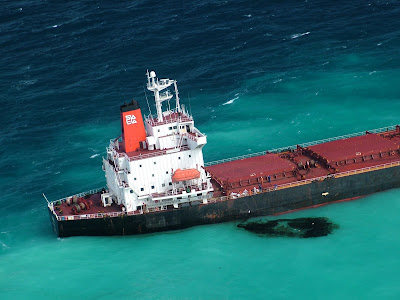 Australian authorities are scrambling to stabilize a Chinese-registered coal ship that run aground Saturday and is leaking oil inside the Great Barrier Reef Marine Park.

Most shipping companies use low-grade fuel because it’s cheap. The sludge like oil needs to be heated before being injected into engines. If it spills, it tends to be more difficult to clean up as it coats birds and other ocean animals, corals and sandy beaches in a gooey mess.

The Shen Neng 1 was hauling more than 65,000 tons of coal and carrying 300,000 gallons of heavy fuel oil it carries to run its engines. It struck the reef at full speed late Saturday in a restricted zone of the marine park near Great Keppel Island off the east coast of Queensland state – about 340 miles north of Brisbane.

Officials have also raised the possibility the ship was taking a shortcut through the marine park.