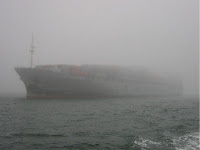 Almost a year after the Cosco Busan left it’s deadly wake of oil spilled on San Francisco Bay, the pilot’s captain in charge of the ship has been ruled at fault.

Capt. John Cota “failed to exercise sound judgment,” the pilot commission ruled in a report released this week. Cota has already given up his license and is under a seven count indictment in Federal court of violating the law by spilling oil and killing federally protected birds.

Cota, 60 of Petaluma, CA was in charge of piloting the 900-foot container ship out of San Francisco Bay on November 7, 2007 when it smashed into the Bay Bridge. After side-swiping the bridge, the ship’s tanks carrying bunker oil were ruptured. The 50,000 gallon spill killed at least 2,500 birds.

“Oh, yeah, it’s so foggy. I shouldn’t have gone,” the Cota was recorded saying on the morning of the spill. “I’m not going to do well on this one.” The morning fog was thick during the 8:30 AM mishap.

The 65,000-ton ship, which was bound for Busan, South Korea, was moving at nearly 13 miles an hour when it hit the bridge tower. 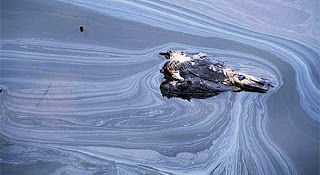 IBRRC and other agencies worked feverishly following the spill to capture and save as many oiled birds as possible. More than 1,000 birds were brought to our bird center in Fairfield, CA. Only 421 were returned the wild. Some biologists estimate that some 20,000 birds ultimately died in the spill and may have died elsewhere or sunk in the bay.