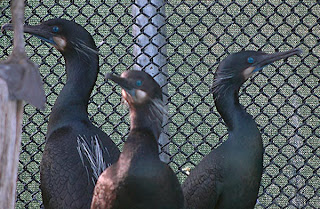 On April 23, the International Bird Rescue Research Center (IBRRC) in Fairfield got a call about a Brandt’s Cormorant hanging out at the El Cerrito del Norte Bay Area Rapid Transit (BART) Station.

One of our long-time volunteers, Carol Lombard, went to the station to try to capture the bird. It was thin and weak.

With the help of five or six people waiting for their train, Carol was able to capture the cormorant and bring it to the center.

As she put it, “these people put their lives on hold to help me rescue this bird”. They used their sweaters and jackets and briefcases to help “contain” the animal so Carol could do her thing.

The bird has now gained 300 grams. It is feisty as all heck, says Marie Travers in the IBRRC clinic. It’s referred to as a “monster” now, and is going to be released soon.

We have no idea who the people are that helped Carol that day. We’d like to publicly thank them for their collective efforts.

– A big thanks from the IBRRC Staff!

By the way, Brandt’s Cormorants have been washing up dead and dying along the Central and Northern California coast. Update

Note: The El Cerrito BART Station cormorant is the bird on the far right.