On the eve of the anniversary of the Selendang Ayu Spill (December 8, 2004), we are saddened to hear of the misfortune to the M/V Exito and her crew last night. Our hopes and prayers are with the captain and crew and their families.

The Exito and her crew were contracted with B​ird ​Rescue​’s Response Team during the M/V Selendang Ayu Oil Spill, a particularly challenging spill in the Aleutian Islands. 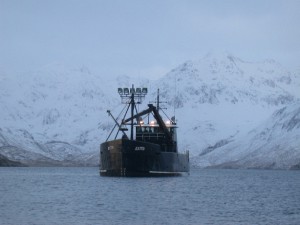 Because of the remoteness of the spill site, Bird Rescue contracted with the M/V Exito and the M/V Norseman, two crabbing vessels (think ​“Deadliest Catch”) that were available for when the fisheries around ​the island of ​Unalaska were closed because of the spill.

The Exito and her crew hosted several of our Response Team in addition to a specially-retrofitted Wildlife Stabilization unit, and was used to provide an at-sea “base camp” for our Responders and the wildlife they captured in extremely remote areas. Their contribution was invaluable to the wildlife we were able to help, and we hope that the missing crew are safely returned home.

You can read more here in an article from Alaska Dispatch.