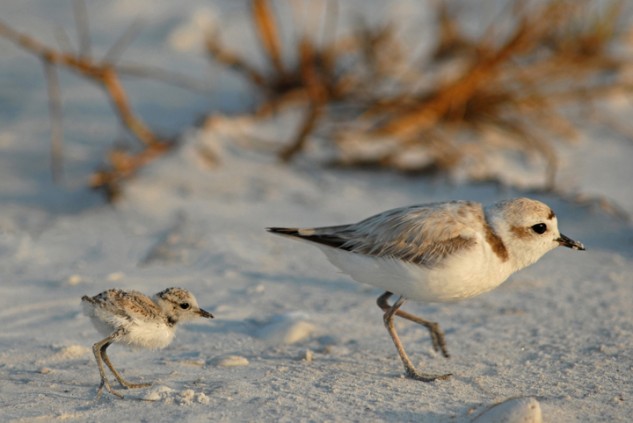 — The Snowy Plover, a small shorebird listed as threatened under the Endangered Species Act, has been found to be nesting on Stinson Beach in Northern California’s Marin County for the first time in three decades.

Bay Nature speaks with Lynne Stenzel of Point Blue Conservation Science (formerly PRBO), whose team made the discovery of a group of plovers at a single nest:

“Several aspects of this nest were unusual,” Stenzel said. “First, there were five plovers in close proximity while the eggs were being laid; usually pairs are territorial around their nest.  Observers identified three of these birds as females (two wore color bands); the other two were brightly plumaged males. Then, several days after the nest held the usual three eggs, a fourth egg appeared; this is uncommon though not unheard of. And two different plovers, both presumed females, took turns on the eggs for part of the 28-day incubation period. Finally, both males disappeared from the area before the eggs hatched; in snowy plovers, the male usually stays and tends the chicks.” [Bay Nature]

— Small, short-lived birds may have an evolutionary advantage in the face of climate change, according to a new study published in PLOS Biology. [Los Angeles Times]

— As the process for allocating billions of dollars in funds from the Gulf Oil Spill settlement begins, a new economic report on the Gulf states finds that the $19 billion wildlife tourism market depends heavily on pristine habitat for wildlife watching, with birding a primary tourist attraction. [Wildlife Tourism and the Gulf Coast Economy]

— Some 30,000 American White Pelicans have returned to North Dakota’s Chase Lake National Wildlife Refuge to nest. Biologists have been monitoring 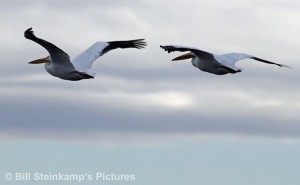 pelicans at the large refuge since 1905, three years before President Theodore Roosevelt declared the area a bird refuge to protect the animals from feather poachers and target practice. [Fox News]

— Voluntary conservation programs on private property, which accounts for 60% of all land in the U.S., is of significant importance for avian life in America, according to a new report by the U.S. Department of Agriculture and the Department of Interior. [Houma Today]

— NBC News takes a look at what appears to be a growing problem: Urban chicken enthusiasts abandoning their animals at shelters after the novelty wears off and the challenges of raising these birds become evident. “Many areas with legalized hen-keeping are experiencing more and more of these birds coming in when they’re no longer wanted,” said Paul Shapiro, spokesman for the Humane Society of the United States. “You get some chicks and they’re very cute, but it’s not as though you can throw them out in the yard and not care for them.” [NBC News]