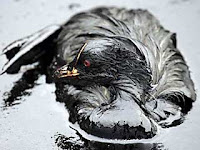 On the heels of the San Francisco Bay spill, this week a major spill hit the Black Sea area of Russia. Up to 30,000 birds are reported to be dead after an oil tanker leaked 560,000 gallons of oil into the sea. The tanker broke in half after encountering stormy seas. CNN Video Report

Two team members from our joint IBRRC/IFAW Emergency Response team are already on their way to help. See the IBRRC report

4 thoughts on “Birds don’t get a break this month”