As 2012 draws to a close, we’re looking back on some of International Bird Rescue’s most fascinating case studies of the year. Today, we remember an amazing comeback by a Brown Pelican, told by Dr. Rebecca Duerr:

On October 1, young adult Brown Pelican 12-1473 was brought to our Los Angeles facility by Redondo Beach Animal Control with a large, 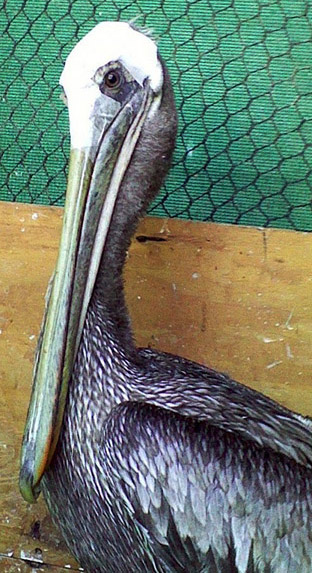 multi-hooked piece of fishing tackle attaching the right side of her head to her right wing.

Once our staff freed her from the hooks, it was readily apparent that her wounds were very severe. The wing had numerous hooks in it, thankfully none causing serious damage, but the facial wound was extremely concerning. The hooks were lodged in the skull and mandible (lower jaw) bones at the temporomandibular joint (TMJ—the jaw hinge), and in addition to a large amount of dead tissue in the wound, there were maggots infesting the area. The bird was emaciated and very weak but responded well to fluid therapy and warmth, and later began eating eagerly when fish was offered.

I first examined the bird a few days later, after she had become stronger and more stable medically. From what I had heard, I thought it was going to be a clear-cut case that might warrant euthanasia, as the amount of damage to important structures was likely to be extensive. Brown Pelicans plunge-dive at top speed, mouth first, into the ocean to catch dinner, so damage to the jaw joint could result in a bird unable to feed itself.

We anesthetized her so I could evaluate the injury. I found a large and deep open wound located in the triangular area between the eye, ear and TMJ, with a piece of dead bone hanging free in the air and deep pockets of infected material that penetrated the jaw muscles and skull. The ear canal appeared uninjured at the edge of the wound but had maggots once again infesting it. I removed the dead piece of bone, excavated dead bone from the skull and cleaned out all the debris. Deep in the wound, I discovered that the TMJ itself was open to the outside world, and joint fluid was oozing into the wound. I had a full view of the articular cartilage of the bony surfaces where the mandible hinges in its groove on the skull, kind of like looking down into the surfaces inside a door hinge.

At this point, it looked like euthanasia was the best option for the bird, as open joints are highly likely to suffer damage from infection, which would likely destroy the important cartilage that allows the hinge to move smoothly. This bird was also missing a piece of the jugal bone, the dead bone removed earlier.

But after finishing cleaning all the dead tissue out of the wound and talking to the staff about how well the bird was doing, I changed my mind. She was eating very well and holding her bill in perfectly normal alignment, even snapping aggressively at people like a normal, frisky pelican should, and the joint surfaces of the TMJ looked currently undamaged, although obviously were contaminated and at risk of deterioration. 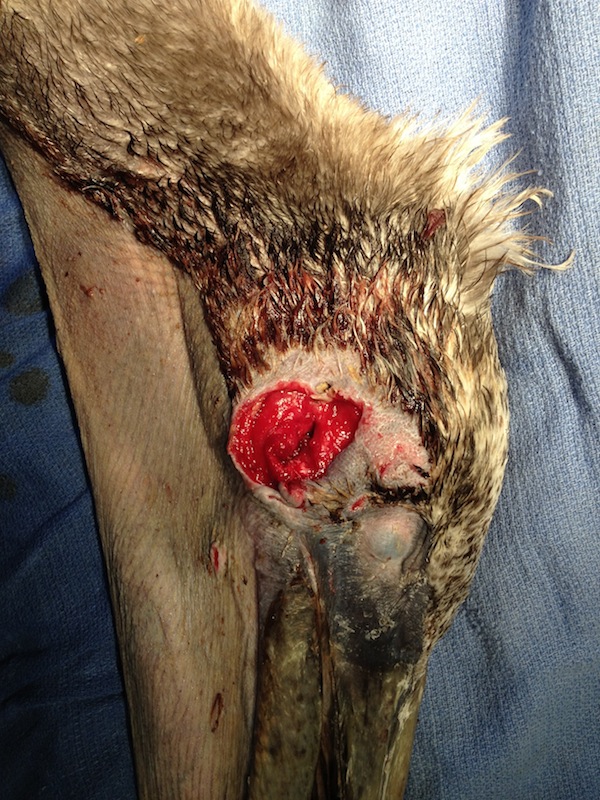 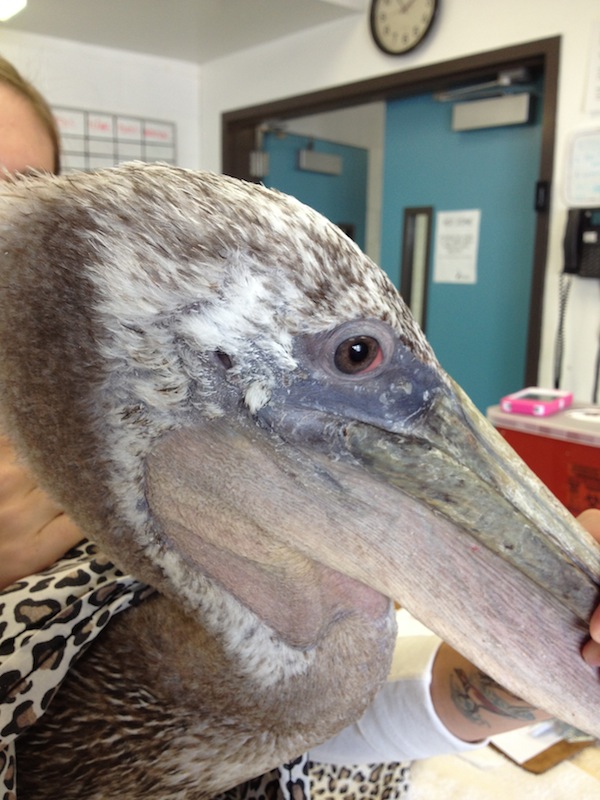 Considering some of the incredibly nasty wounds from which we have seen pelicans successfully heal, we decided to see what we could do for this bird to facilitate her recovery from this devastating injury. We knew it was a long shot, not only because it was possible the infection would continue to spread despite antibiotic therapy, but also because even if it did heal, the bird could wind up with a jaw joint that didn’t work very well.

We developed a plan of daily wound care to both protect the open joint hinge and foster growth of new tissue in the rest of the wound. Our wound care had to be frequent enough that even if flies laid eggs on the bird, we would be able to remove them before they hatched. Due to the location of the wound, application of wound dressings was a challenge. We could not wrap bandages all the way around the head or else the pouch would be constricted in a manner that prevented the bird from eating. Whenever possible, we allow birds to feed themselves if they are minded to. In this case, I wanted the bird to use the mouth as normally as possible while the joint was healing. We also needed to keep the bird out of the water for a time to prevent the wound dressings from becoming wet with pool water.

Two weeks later, we anesthetized the bird to assess the wound’s progress. I once again found a deep hole with a lot of debris inside, although it was only about one-fourth the diameter of the original wound. Once I cleaned it out and inspected it with magnification, I found that the joint had closed over, and all the tissue inside the hole appeared to be healthy granulation tissue. Due to ongoing concerns with fly strike, and considering how healthy the tissue appeared inside the hole, I decided to suture the wound closed. The bird was able to finally take a bath and enjoy roaming around our pelican aviary.

As of November 1, after a month of treatment, the injury has completely healed, and there is no evidence that the remaining muscles and bones of the jaw are having further problems. The range of motion of the joint is near normal, and the bird is able to eat well and snap at our staff and volunteers with normal-seeming vigor. All medications and treatments have been discontinued, and we are planning to keep the bird a few more weeks to allow any final internal reorganization of the jaw tissue to become as strong as possible before she needs to start plunge diving for dinner out on the ocean again. Meanwhile, she is spending time with other pelicans in our aviary and regaining flight strength and endurance. Release is expected later this month. 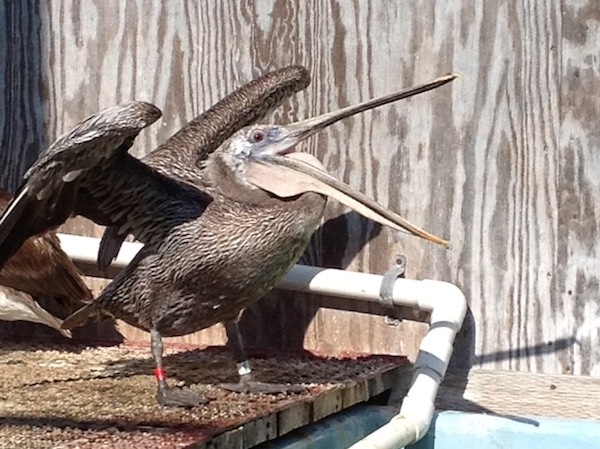