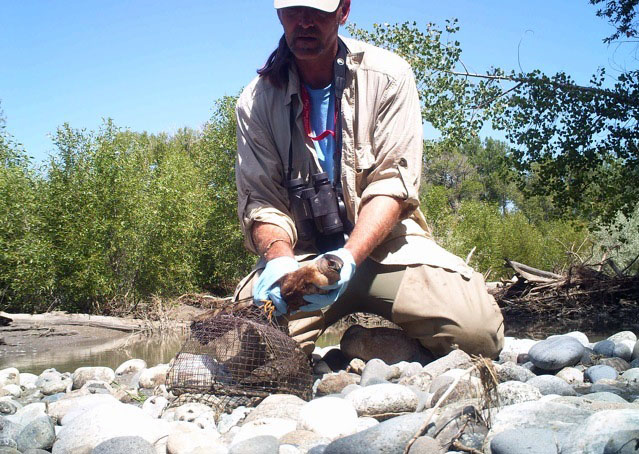 Now that the river is receding our teams can access many of the islands in the Yellowstone River and evaluate the impact that the oil has had on wildlife. Some of these islands are a number of acres, while others are very small, and many host large groves of mature and majestic cottonwood trees, lots of brush and, of course, mosquitoes. Visiting the islands is logistically challenging; each team receives a safety briefing, must wear safety gear for dangerous water areas, and transport boats have to be assigned and coordinated. When we get to an island we scour all areas looking for oiled wildlife; it’s hot, swampy, muddy and difficult work.

Five days ago, International Bird Rescue response team members Adam Ribota and Mark Russell went to one of the large islands and spotted a male Cooper’s Hawk, still able to fly and seemingly strong, but approximately 30% oiled. Concerned, they revisited the island for three days and found that while the bird would fly into the trees when approached, it could frequently be found sunning itself on a log near the river. This somewhat abnormal behavior indicated that that bird might be becoming hypothermic. 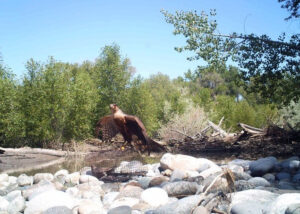 Montana is infamous for its thunderstorms, dumping massive amounts of rain. Caught in one, any oiled bird would quickly become waterlogged and be unable to maintain its body temperature. We have used thunderstorms to our advantage in the past to help us capture oiled birds. In the Gulf of Mexico, for example, we caught six soggy White Pelicans in a single downpour. This Hawk on a difficult-to-access island would be at great risk, and a plan to capture it went into effect.

Dave Pauli of the Humane Society of the United States played an important role, connecting us with a local falconer who had a specifically designed snare trap for raptors. This small dome-shaped cage made of hardware cloth had many small monofilament line nooses tied over it. A young Starling was placed in the cage, where it would be safe but would lure the Hawk. When the Hawk flew down to attempt to capture the Starling, the Hawk’s legs would become entangled.

On Tuesday, we set up the trap on the sandbar where the Hawk was frequently seen, and Mark and I hid in the trees about 50 feet away. Within an hour and a half, the Hawk was ensnared. We removed the bird and took it to our rehabilitation center. 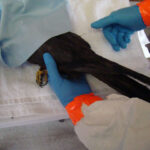 There was concern that this bird may have young to care for. If he was in good health we would do our intake procedure (identify the species, establish the amount of oil on him, take a feather sample and photo), do an exam, and then immediately wash him, keeping him overnight for release the next day. During a previous major spill we had a number of Bald Eagles who were oiled but also had chicks in nests. The US Fish & Wildlife Service would capture one parent and bring it to us, leaving the other parent to care for the chicks, and we would do an exam, wash the bird and release it back to its nest area within 48 hours. With the return of one parent, we would capture and treat the other.

Once blood was taken from the Hawk and his exam indicated that he was a very healthy bird, we continued with our fast-paced plan. Despite the fact that Cooper’s Hawks are very stressy and shy, this bird handled the washing and human contact well. He was captured Tuesday morning, treated and washed, and on Wednesday morning the hawk was transported to the island and released.

It shot out of the cage and disappeared into the forest.