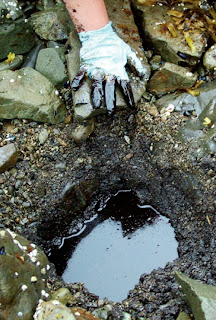 With the 20th anniversary of the Exxon Valdez oil spill upon us, a spate of news stories and opinion pieces will surely follow. However, one piece of information worthy of reading is a report that says oil from the spill in some places is “nearly as toxic as it was the first few weeks after the spill.”

The report makes it clear that just below the surface, oil from the 1989 spill still haunts the Prince William Sound tidal areas.

“In 2001, researchers at the Auke Bay Laboratories, NOAA Fisheries dug over 9,000 pits, at 91 sites, over a 95-day field season. Over half the sites were contaminated with Exxon Valdez oil. Oil was found at different levels of intensity from light sheening; to oil droplets; to heavy oil where the pit would literally fill with oil…In 2003, additional surveys determined that while the majority of subsurface oil was in the midintertidal, a significant amount was also in the lower intertidal. The revised estimate of oil was now more than 21,000 gallons (80,000 liters). Additional surveys outside Prince William Sound have documented lingering oil also on the Kenai Peninsula and the Katmai coast, over 450 miles away.”

Another sobering part of the report continues:

“The amount of Exxon Valdez oil remaining substantially exceeds the sum total of all previous oil pollution on beaches in Prince William Sound (PWS),including oil spilled during the 1964 earthquake. This Exxon Valdez oil is decreasing at a rate of 0-4% per year… At this rate, the remaining oil will take decades and possibly centuries to disappear entirely.” 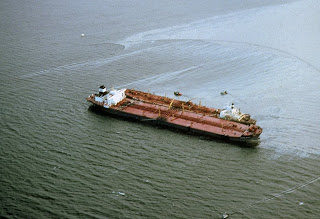 Nearly 11 million gallons of oil spilled from the Exxon Valdez after it ran aground at Bligh Reef early on Good Friday, March 24, 1989. The ship was captained by Joseph Hazelwood and bound for Long Beach, California with 35 million gallons of crude. It is the largest oil spill in United States history and lives on as one of the largest ecological disasters. 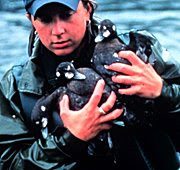 IBRRC personnel spent six months at the spill helping coordinate animal search and collection and treatment of oiled birds. More than 1600 birds were recovered alive and over half were successfully released cleaned back into the wild.

The bird deaths during the spill were astronomical. Between 300,000 to 400,000 seabirds were believed killed by the spill. About 35,000 bird carcasses were recovered. The majority of birds killed were Murres.

The report was submitted by the Exxon Valdez Oil Spill Trustee Council that was formed to oversee restoration of the injured ecosystem through the use of the $900 million civil settlement with Exxon.

Or the smaller version Word document without photos and charts