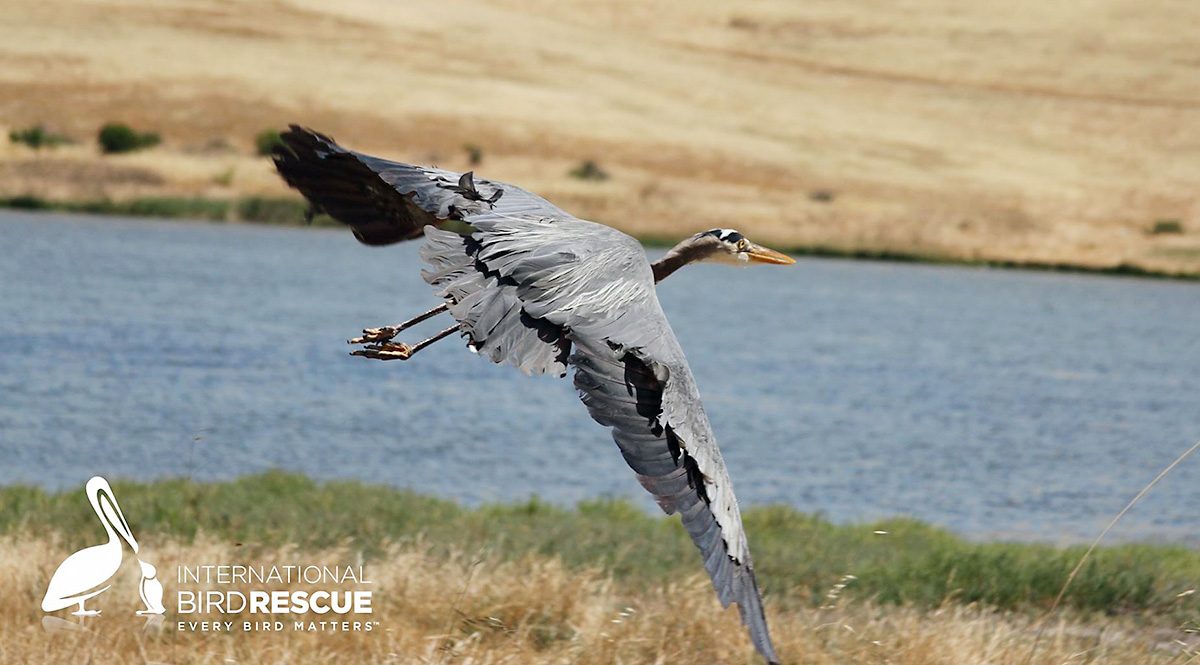 An adult Great Blue Heron came to us from Native Animal Rescue in Santa Cruz after being found April 14 hanging from its right wing by fishing line. On arrival the bird had substantial skin damage and edema midway out the wingtip, and the bones felt possibly fractured under the swelling. We splinted and wrapped the wing for support to make the bird more comfortable, and scheduled x-rays for a few days later when the bird was more stable.

The x-ray showed the wingtip had not been fractured – but rather had ligament and bone damage at one of the two wingtip joints. Over the next week the edema resolved but the skin crossing the wing tip joint necrosed (died), leaving defects in skin coverage and an infected joint. Also the bird’s primary flight feathers were damaged and severely crimped which put them at high risk of breaking. With all the bird’s issues it was not looking good for this bird ever flying again.

In treatment we used a feather repair method where the feathers are soaked in extremely hot water to soften them. Then our staff veterinarian ‘ironed’ the feathers to reshape the crimped zones and thus restore the feather’s normal shape.

The skin and joint injuries were more complicated. Our vet treated the heron by surgically removing dead tissue and closing the main defect with adjacent skin. Another area of skin necrosis that exposed the infected joint itself was debrided, flushed, infused with an injectable antibiotic, and managed as an open wound.

The wingtip injuries finally and completely healed as of earlier this week, and we were at last confident the bird was out of the woods. So, with great pleasure, we released this gorgeous Great Blue Heron this week and watched it gracefully fly into the marsh!