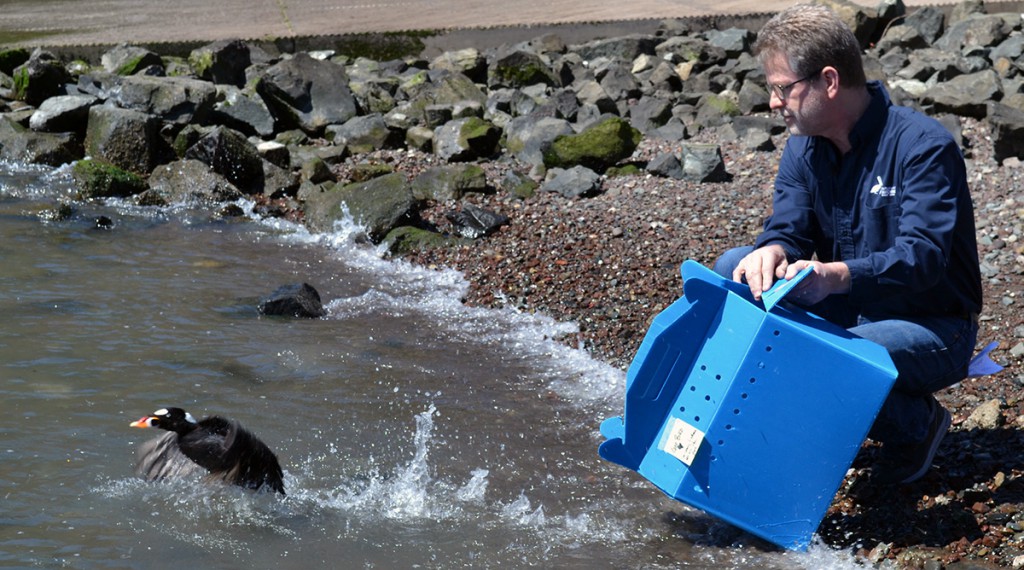 The last Mystery Goo bird in care – a male Surf Scoter – was released Wednesday back to the wild.

The seaduck’s freedom represents the end of three long months of rehabilitation that included hundreds of birds that were contaminated in San Francisco Bay by a yet to be fully identified substance that coated birds with a sticky substance back in mid-January.

“We are so happy to see the final clean, healthy seabird returned to the wild,” said Barbara Callahan, Interim Executive Director of International Bird Rescue (IBR). “We are also extremely grateful for the public’s support – including the generous donations that helped us fund this expensive response.”

The mystery goo impacted over 500 hundred aquatic birds – 323 were brought into care at IBR’s San Francisco Bay Center in Fairfield and 165 of those have now been RELEASED! The remaining birds were in such poor condition they could not be saved. At least 170 dead bird carcasses were picked up during January by California Department of Fish and Wildlife (CDFW) personnel.

The goo covered the feathers of seabirds, destroying their ability to stay warm, but no mystery goo was found to be on the beach or in the water, which deepened the mystery.

No responsible party has yet to be identified and the cost of all the bird care has fallen to IBR who has relied on the help of the public and foundations for donations. Bird Rescue has spent nearly $150,000 on this unusual contaminant response. Donate here

Many of these rescued birds also came to the center with pressure sores on their hocks or toes from being stranded on hard land. These injures can take months of care and healing. Other patients had surgeries for keel injuries but most of those healed quickly.

On February 12, state and federal labs concluded that the substance that coated birds includes a mixture of non-petroleum-based fats or oils. See the press release from CAFW: http://ow.ly/J4bZp

This week a bill moved through the first round of committees that would open a state oil spill response fund to help pay for non-petroleum responses involving wildlife. See info on the bill proposed by California State Senator Mark Leno (D-San Francisco)