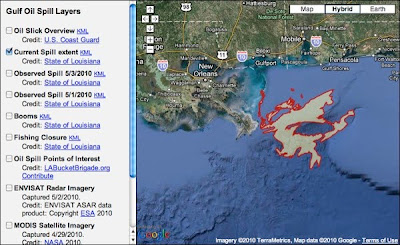 A new layered Google map of the Gulf Oil Spill was released yesterday by the internet giant to help folks understand where the enormous oil slick is located. See it live here

Google’s Crisis Response Team developed the map using a series of satellite images showing the current and past movement of the oil spill and an overlay map of closed fishing areas off the Louisiana and Mississippi coasts.

The map shows the 3,300 square mile spill has touched land in a few locations but is mostly still out at sea.

You can also use the map in Google Earth by downloading KML files here.