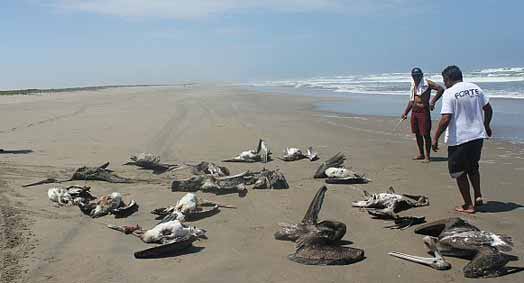 What’s new? Another round of animal die-offs on the coast of Peru include Brown Pelicans, critter cams abound in the avian world, and a controversial campaign to save native birds in New Zealand from domestic cat predation.

— In Peru, a die-off of unconfirmed origin is affecting Brown Pelicans, sea lions and dolphins. Last year, more than 500 dead pelicans were found along a 43-mile stretch of beaches in the Lambayeque region of northern Peru. Government officials have cited natural causes in the animal deaths — a continued point of contention for conservationists. [Latino Daily News]

—Bird activists in New Zealand start a controversial campaign to rid the island nation of housecats in order to save native bird species. [Time]

—A U.S. Navy minesweeper ran aground on a reef in the Philippines while on its way to Indonesia and will need to be loaded onto another ship or barge. About 15,000 gallons of fuel are being siphoned off the vessel to prevent a spill. [Honolulu Star-Advertiser]

—Video of the week: a miraculous encounter with a bottlenose dolphin suffering from fishing line entanglement between its mouth and left pectoral fin. [YouTube]

Note: If you see marine life in distress, please contact the National Oceanic and Atmospheric Administration at 800-853-1964. For information on reporting injured seabirds, visit our Found a Bird? page.