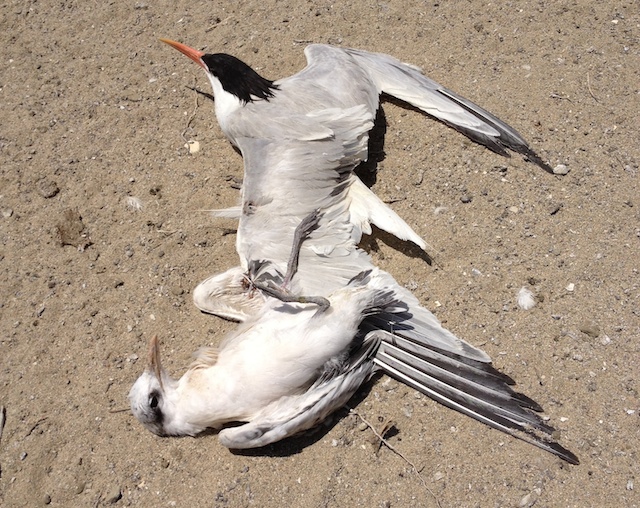 Update July 8, 2014 from our vet: “Wounds are healing well but both parent and chick still have guarded prognosis for full return to function. Chick has elbow and leg problems, parent has wing problem.” We will continue to update you when we know more. Thanks for your concern. –IBR Staff

As we posted earlier this week, our Los Angeles center recently received an adult Elegant Tern and a tern chick hooked together by a fishing lure. Found at the Terminal Island tern colony near the Ports of Los Angeles and Long Beach, the birds have since been separated and are now receiving daily bandage treatment, antibiotics and plenty of supportive care. The prognosis remains guarded.

Nick Liberato, a biologist who monitors the tern colony, found the birds and took this photo upon rescue. “I spotted them as I was ushering some stray chicks back through the chick fencing and into the main rookery,” Liberato says.

“As is usually the case, tangled birds become noticeable when the rest of the colony moves away as one approaches,” he says. “At first, I thought they were just tangled in monofilament [fishing line], but when I saw that multi-hooked lure puncturing both of them, I knew my tools wouldn’t cut it, so I got them over to you guys as quickly as possible.”