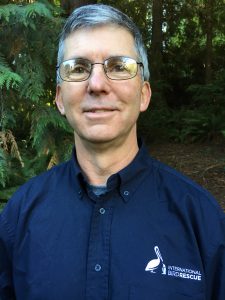 Editor’s Note: The work we do at Bird Rescue wouldn’t be possible without our amazing team of staff, volunteers, and board members! Read below to meet one of our stellar team members!

While Ron may be a relatively new member of the Bird Rescue board, he’s a long-time friend to the organization. As a retired Captain in the U.S. Coast Guard and the former General Manager and President of Alaska Clean Seas, Ron has been an ally of Bird Rescue since the mid 90’s. From spill exercises and oil spill response, to capture and stabilization training throughout mainland and coastal Alaska, Ron’s collaborative efforts with Bird Rescue have a long and rich history.

Ron first met our Response Services Director, Barbara Callahan in the late 80s and our late Executive Director, Jay Holcomb in the late 90s. Ron remembers working emergency response efforts with both Jay and Barbara and looks back on the events fondly. “When you’re working in that sort of a situation with someone, one where every moment counts, you begin to get a sense of who they are, of what they are made of.” Both Jay and Barbara were a pleasure to work with, and I knew I could rely on them”.

Though Ron’s official capacities may have shifted when he retired, the same sense of duty and willingness to help has stayed with him as a now Board Member and currently chairman for International Bird Rescue. Ron not only brings a career’s worth of coastal and oceanic knowledge to the table but an Officer’s ability to step in and get the job done as needed. Our Executive Director, JD Bergeron, said it best “Ron brings to the board all of the confidence and reassuring demeanor of a ship’s captain. He calmly and skillfully steers the board through the challenges of a successful not-for-profit organization as it approaches its 50th year.”

Ron found both his career with the U.S. Coast Guard and with Alaska Clean Seas to be rewarding and fulfilling but is happy to be retired and enjoying a different side of life. When Ron is not busy with Bird Rescue, you can find him traveling the countryside with his wife Kandis (married 40 years!) in their RV, at his cabin in Oregon, or spending time with his two daughters and grandchildren (including furry ones) in Washington. When reflecting on his life’s accomplishments Ron’s family was at the top of his list, his eyes lighting up the whole time he spoke of them. Ron loves to travel, golf, kayak, and ski, and is proud to stand by Bird Rescue as a beloved board member. Thank you, Ron, for bringing all that you do to the organization!