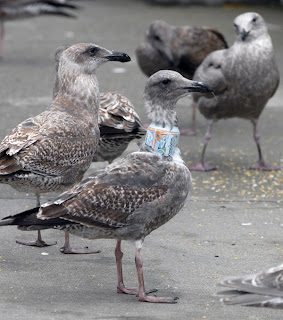 A rescue team from WildRescue and IBRRC captured another beer can collared gull today in San Francisco. The gull had the can removed from its neck and was released.

This is the third bird captured with a cut beer can secured to its neck. This gull was captured at San Francisco State University. The can was removed and the bird had only minor feather damage to its neck. The gull was released quickly back to the wild.

There have been multiple sightings of birds flying around with these neck collars. A $6,500 reward for information leading to an arrest has been in place since November. One bird was rescued last month at Lake Merced and another in Half Moon Bay.

“This is a federal crime punishable by severe fines, imprisonment, or both,” says Rebecca Dmytryk, with WildRescue, the group spearheading this effort. The US Fish & Wildlife Services, who administrate the Migratory Bird Treaty Act under which this act is punishable, has been alerted to these incidents. 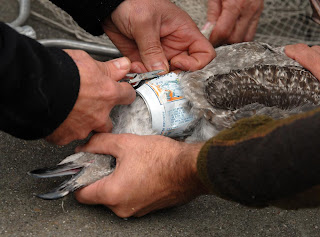 WildRescue asks that instead of attempting to capture the birds, which can make them more wary and harder to catch, sightings should be reported immediately by calling (831) 429-2323 or emailing rescue@wildrescue.org.

4 thoughts on “Success! Another beer can collared gull rescued”