I am one of the few people who have been fortunate enough to visit Midway Atoll in the northern part of the Hawaiian Archipegelo; in fact, I’ve made it there twice! Midway is famous as a nesting site for millions of pelagic seabirds such as Laysan and Black-footed Albatrosses, Bonnin’s Petrels, endangered Laysan Ducks and many more.

My first visit, over 10 years ago, was to train US Fish & Wildlife personnel to be better prepared for oil spills should they occur in this remote part of the world. The second trip, only 7 years ago, was to help in the annual bird census. We were required to spend three weeks on the main island, but I had no problem with that — it was awesome.

The beauty of the place was overwhelming, but unfortunately what really caught my attention was the trash. Beaches that should be pristine were littered with plastic of all kinds, as far as you could see. It was shocking and disturbing to see that Albatrosses were feeding the smaller pieces of plastic to their chicks. As Albatross parents swooped down to grab surface-floating food they could not tell the difference between the squid and fish they needed and the trash that littered the area.

There were literally hundreds of thousands of Albatross nests on the Atoll, and every nest had pieces of plastic in or around it. Some nests even contained the skeletons of Albatross chicks that died due to dehydration from eating too much plastic and not enough juicy, liquid-filled squid.

For a powerful visual of what we saw check out Jean-Michel Cousteau’s short video on YouTube. 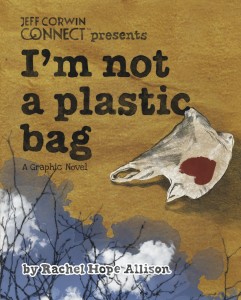 I bring all this up to highlight the release of an excellent new book called I’m Not a Plastic Bag by Rachel Hope-Allison. Allison’s story, published in association with JeffCorwinConnect, is told entirely without words and follows the journey of a few pieces of discarded trash—a supermarket plastic bag and an old umbrella—all the way out to the middle of the Pacific Ocean. Here, the bag and the umbrella join together into a tragic and destructive island of trash, which searches for its place amidst the fragile beauty of nature. This graphic novel depicts a very real phenomenon known as the Great Pacific Garbage Patch, an accumulation of human consumer waste that floats in an area between Hawaii and the California coastline.

This book is brilliant! Take this opportunity to learn about plastics and how we are responsible for the damage they do. It’s all preventable!