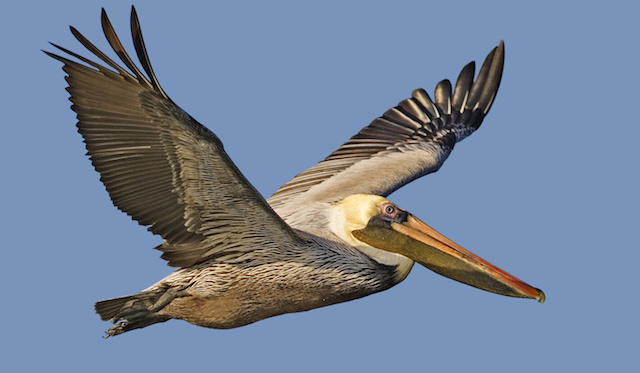 • Southern California Public Radio takes an in-depth look at how a lack of prey availability, perhaps driven by an El Nino climate event, has impacted Brown Pelican breeding this year. Breeding failure among Brown Pelicans has been observed in Baja California, where 80-90% of California Brown Pelicans breed.

“It’s been almost a nearly complete failure to breed, which is quite unusual actually,” said Dan Anderson, a professor emeritus at University of California-Davis who has visited Baja for 46 years to survey pelican breeding. “At one island that we study, Isla Salvatierra, which would normally have 8,000-10,000 young, only had like 20 young.” [Southern California Public Radio/KPCC]

• The New York Times reports on the saga over Black-crowned Night Herons in Oakland. IBR is pleased to report that four of the five herons are scheduled for a release on Saturday! (The fifth remains in care but is doing very well.) [New York Times]

• Meanwhile in Los Angeles, Pink the Pelican is released! LAT produces a great video as well on the rehabilitation journey for this special animal. [Los Angeles Times]

• Anna Weinstein of Audubon California has an insightful update on advocacy efforts to ensure proper monitoring of the California Brown Pelican, de-listed from the Endangered Species Act five years ago. [Audublog]

• Wildlife rehabilitators on a mission to save birds of prey in New Dehli, India. [Al Jazeera]

• One final pelican note: Congrats to filmmaker Judy Irving for reaching her Kickstarter goal on Pelican Dreams, her forthcoming documentary. Watch a trailer of the film below. [Vimeo]