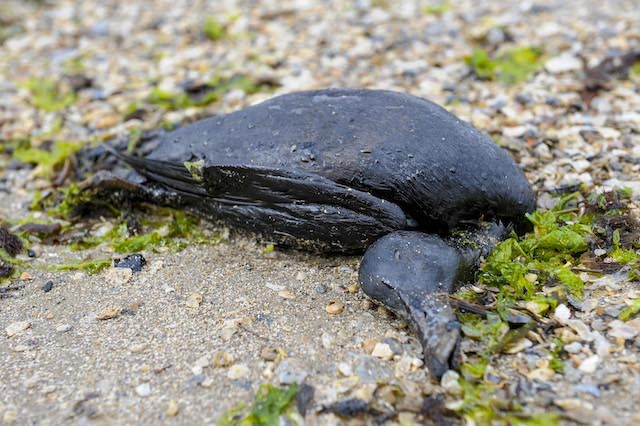 A victim of the Galveston Bay oil spill, photo by Chase A. Fountain, © Texas Parks and Wildlife Department.

• Clean-up and wildlife rescue efforts continue following the collision of two barges on March 22 that caused an estimated 170,000 gallons to spill into Galveston Bay, Texas. The National Audubon Society in a statement reported that damage to bird habitats may be contained to the immediate area surrounding the spill. Only a relatively small number of oiled birds has been collected and transported to wildlife rehabilitators.

• Houston Audubon: “It’s a terrible event. It sure could have been a lot worse.” [Los Angeles Times]

• Audubon has a comprehensive map of where beached oil has been spotted, as well as where designated important bird areas and breeding pairs of bird species are located based on 2013 census data. [Audubon]

• The long-term impact of the spill on Galveston Bay is unclear. [Al Jazeera America]

• 10 birds in local habitat that could be affected. [Buzzfeed Community]

• Wildlife responders care for oiled birds that have been captured. [CBS Houston]

• Op-ed: The plight of the pelican in California. [Los Angeles Times]

• Eradication of an invasive plant is paying off on Hawaii’s Midway Island, where albatrosses nesting on native grasses fare much better than nests on nonnative Verbesina. [West Hawaii News]

This just in: whooping crane sightings popping up in Wisconsin! pic.twitter.com/y6Shp81cXn

“Wow, look at that laughing gull. First, I thought it was a black bellied grovel, but it’s all black” #oilspill: http://t.co/8YbB1e5TlX

One reason Exxon Valdez still traumatizes is that plenty of oil remains along shores, continuing to toxify animals. http://t.co/7wk64zG8Us