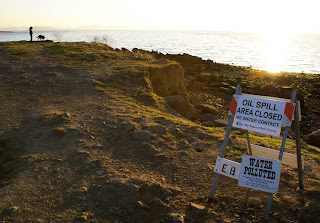 One of the big problems we’re seeing in this tragic oil spill in San Francisco Bay is the HUMAN element. Many of our wildlife rescue members have reported running into many people ignoring “closed beach” signs. These thoughtless folks continue to run and walk dogs (on and off leash) along stretches that should be off limits.

Oiled birds are super STRESSED, cold and often starving. The last thing they need is the extra visual stimuli that comes from joggers and dog walkers. They view any intruder into their space as predators and will use the last bit of energy to escape back into the water.

At Pt. Richmond, numerous dog walkers continue to have dogs off leash in sensitive areas. In one account, a dog owner had his dog swimming in the bay and managed to scare off at least 50 oiled birds. This careless act kept birds in need of care out reach of wildlife rescue personnel.

We had another report from a crew member who was shocked beyond belief. He watched as a dog owner ran his big dogs on an oil covered beach near Golden Gate Fields in Albany. The owner then pulled out a ball and began throwing it into the oily bay for the dogs to fetch. When asked to keep dogs off the beach, the owner responded in a very unpleasant fashion.

Please! For the sake of these oiled animals and others, keep your dogs away from sensitive areas on the bay and beaches. LEASH YOUR DOGS at all times around the affected areas, including jetties, boat docks and low tide areas.

Let our crews capture these frightened birds before they succumb to hyperthermia and eventual death.