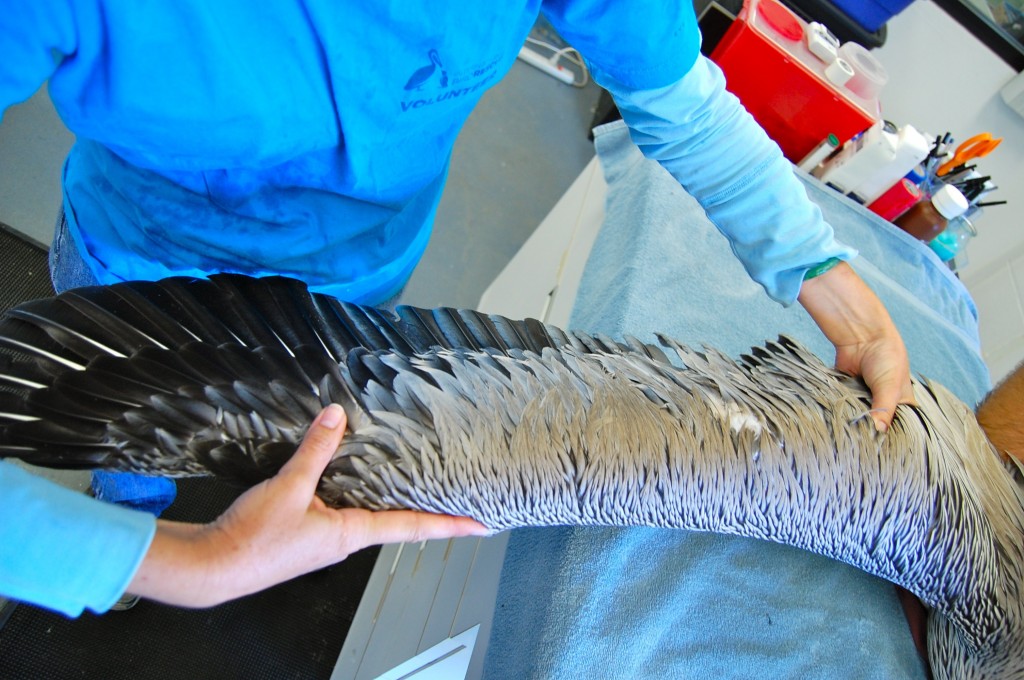 Following a severe wing injury late last year, California Brown Pelican S-62’s body started to fail him. His system had over-compensated for a fracture to his ulna by developing a massive bony callus that grew to encase his adjacent radius, fusing the two bones together (a condition known as synostosis) and rendering him flightless. Just like in a human forearm, where the radius and ulna need to be fully mobile for us to move our hands through the full range of motion, the bones in birds’ wings must be independently mobile in order for them to fly. Without human intervention, Pelican S-62 would die. 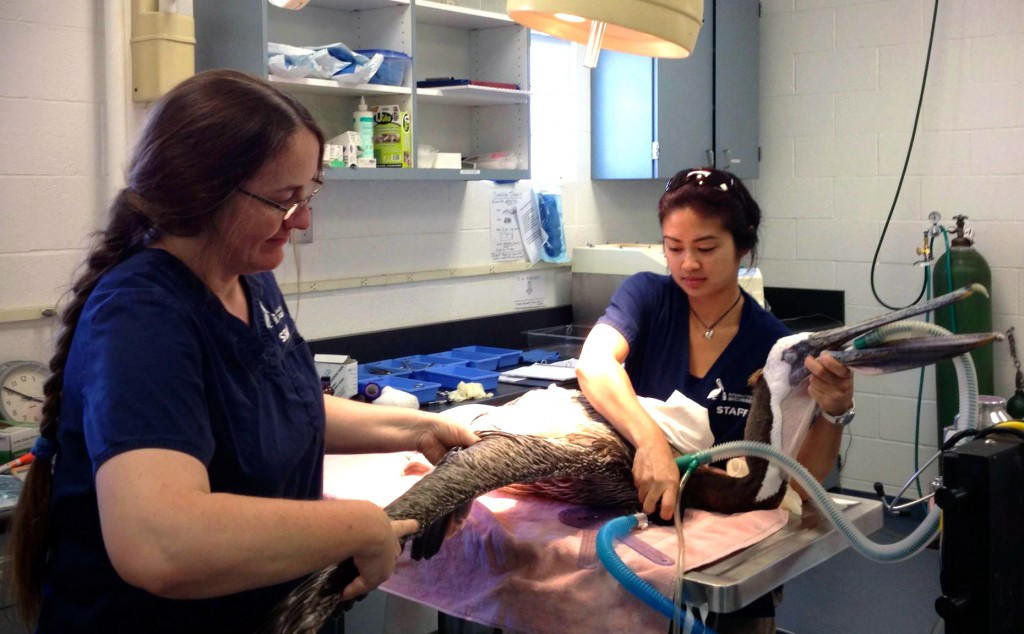 Here’s how we gave him a second chance:
Upon intake examination at International Bird Rescue’s Los Angeles Center, it was clear that S-62’s injury had taken a serious toll on his health, leaving him wounded and battered, with a drooping wing, poor nutrition, and anemia. Once he was stabilized and strong enough to withstand surgery, Bird Rescue’s veterinarian Dr. Rebecca Duerr knew that she would have to go beyond removing the Pelican’s overgrown callus to separate the bones. She packed the space created between the bones with fatty tissue harvested from the bird’s abdomen to prevent the growth from forming again. Not long after surgery, S-62 began stretching his magnificent 7-foot wingspan and showing interest in flapping. With the advice of a human physical therapist that specializes in hands, we initiated an intensive physical therapy plan of wing extensions and range-of-motion exercises on a twice-daily basis. Our staff and volunteers continued this therapy for many months while S-62 made slow, steady progress.

Months of hard work by a dedicated team have finally paid off for this one bird. We are extremely happy to report that we released Brown Pelican S-62 on August 18 at White Point in Palos Verdes. He flew strongly from the shore out past an offshore reef to settle on the water for a few minutes, then a pair of juvenile pelicans flew by and he launched off the water to join them. The three birds flew off around the corner of the cliffs together. The prolonged hard work of our staff and volunteers paid off handsomely with the release of this beautiful adult bird.

International Bird Rescue would like to invite you to support the recoveries of California Brown Pelicans and other aquatic bird and seabird species through our Pelican Partner and Bird Adoption programs. As a Pelican Partner, you help give injured birds like S-62 a second chance. And you can be there when they are released back into the wild — a truly unforgettable moment. 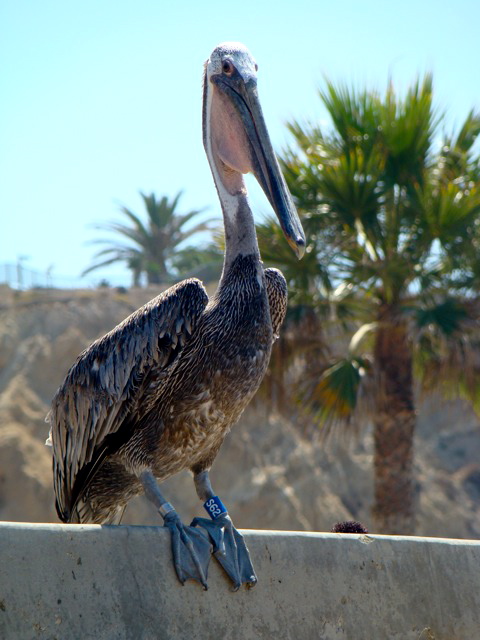 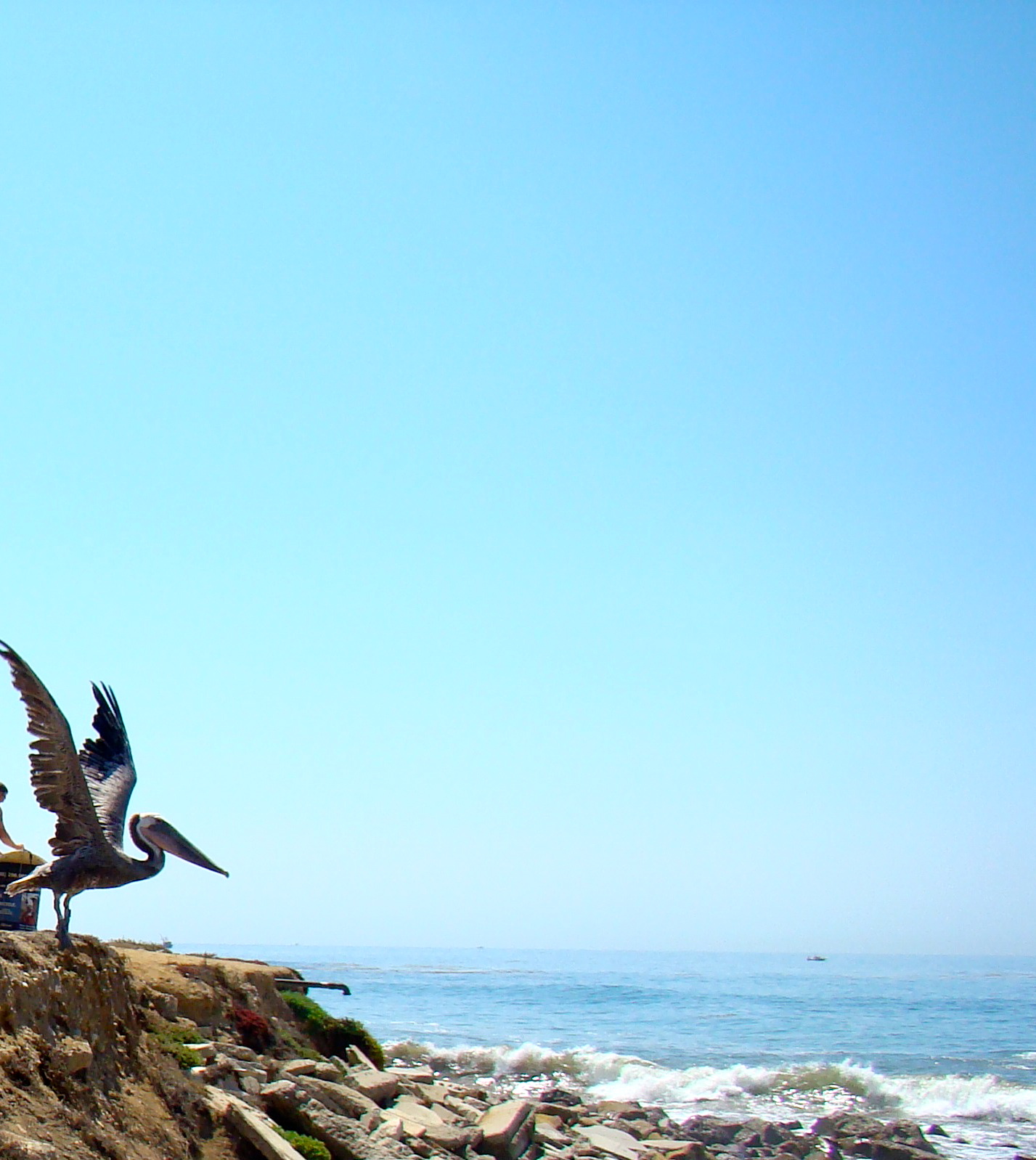 1 thought on “After Nine Months of Rehabilitation, Pelican S-62 Returns to Flight”