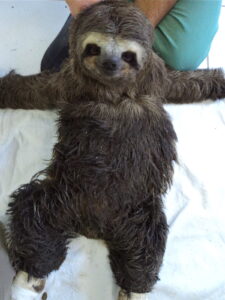 Our international oil spill responses have been challenging over the years, but have brought us both incredible opportunities to learn about other species and to develop rewarding relationships with new colleagues.

After meeting Brazil’s Dr. Valeria Ruoppolo over 12 years ago, she quickly became an important member of International Fund for Animal Welfare’s oiled wildlife team  (co-managed by International Bird Rescue) and Dr. Rodolfo Silva soon joined the fold. They both have played key roles alongside our staff in managing efforts in South Africa, Spain, Norway, Estonia, Argentina, Chile and the Galapagos Islands.

Last year Drs. Ruoppolo and Silva realized their dream of founding a Brazil-based organization to respond to oiled wildlife events, help companies with wildlife related issues, and do ongoing research in the field of wildlife rehabilitation and veterinary medicine.

Brazil has a wide variety of unique and amazing plants and animals. This adult, male, Brown-Throated Sloth (Bradypus variegatus) was discovered covered in oil and clinging to a truck after a collision that may have forced him from his tree. The animal was captured and rehabilitated by Aiuká in what is, as far as we know, the world’s first recorded case of a Sloth affected by an oil spill.

The Sloth was washed clean at the veterinary school CETAS Unimonte, and was transferred to Horto Florestal near São Vicente to recover for two days before being released in Itanhaém where it was discovered.

Aiuká’s expert handling of this animal shows how the knowledge and experience gained in responding to oil spills as a part of a collaborative response team can touch lives all around the world. 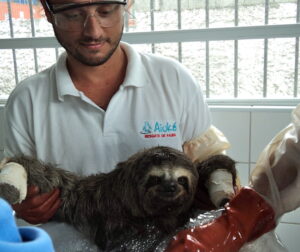