Last year International Bird Rescue spent 6 months helping to manage oiled bird rehabilitation efforts from the Deepwater Horizon oil spill in the Gulf of Mexico. Everyone saw the disturbing pictures of the heavily-oiled pelicans captured in Louisiana. Over 90% of those birds were rehabilitated and released back into the wild. Because the Gulf area was so highly-impacted with oil, authorities decided to release pelicans as far away as Georgia to offer them the best chance for survival. 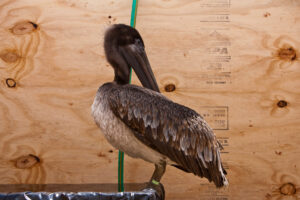 The following article tells the story of some of these pelicans, now nesting and raising young in Georgia. It proves what we have known for years, that many rehabilitated birds not only survive but go on to breed – it’s just not easy to document this once they are released, as they scatter to the wind. To make future identification of birds from this particular spill easier, they were fitted with large, colored plastic leg bands. These bands are paying off, and the birds recognized in Georgia are just a small representation of all of the birds that we released. Hopefully, there will be many more sightings this year.