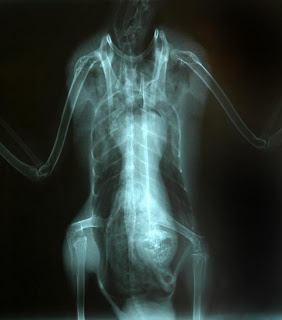 Back in May 2006 and unusual image in a routine bird x-ray caused a major stir on the web that is still being felt today.

The x-ray of a injured duck showed what looked to be a facial image of an alien like face. After tremendous media attention, the original x-ray was auctioned off on eBay to help pay International Bird Rescue’s ongoing bird care. It was purchased by an online gaming website GoldenPalace.com which purchases oddities to support causes and promotes its business: “Alien Duck Migrates into Online Casino’s Collection!“

“The alien x-ray is still one of Bird Rescue’s most popular web pages,” says Russ Curtis, the group’s Technology Manager and Webmaster. “Our web reports show that in the last year alone the page had nearly 30,000 hits.” 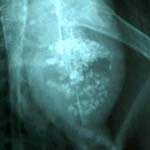 From the original web page:

“The Bird Rescue staff discussed if an alien life form was either consumed by or trying to communicate with the people of Earth through the duck, because the center is located in an area of California known for its mysterious crop circles.”

The staff noted that the symmetry of the alien’s face is perfect, with an intense grimace, as if it was in anguish after being eaten.

“We’re a 35-year-old organization, and we’ve seen a lot of things — bullets, fish hooks — but this is the first time anything like this has shown up. I don’t know my aliens well, but it looks like one of those with the big eyes and the long fingers.” –Jay Holcomb, quoted in San Francisco Chronicle-SF Gate story

Unfortunately the duck died due to its injuries. UC Davis veterinarians did a necropsy and the duck’s stomach had some grain in it, but no alien. Bird Rescue then put the one-of-a-kind x-ray up on eBay, with all the proceeds going toward funding wildlife rehabilitation programs. During the sale the eBay page received over 135,000 visits.