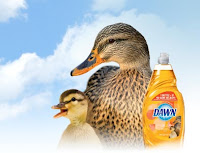 We received five big mystery boxes this week at our offices in California that helps bolster your faith in humanity.

Inside the well packed cartons were 168 bottles of DAWN dishwashing liquid. They were donated by school kids organized by fifth grader Evan Meadows at St. Genevieve School in Flourtown, Pennsylvania.

In a letter from his mom, Kathie Meadows, she says:

“My son, Evan Meadows, a fifth grade student was so moved by the Dawn commercials he saw over the summer he decided he wanted to something to help and to raise awareness of the plight faced by the animals affected by the BP Gulf Coast spill.

The 500 pounds of dishwashing liquid were shipped free from a local UPS store.

By the way, IBRRC has been using DAWN for more than 30 years to help remove oil from birds feathers. Dawn’s parent company, Procter & Gamble has been a long-time supporter of wildlife rescue efforts including year-round donations of DAWN to the bird rescue group’s two California bird centers. See: Dawn Saves Wildlife

Thanks to Evan and his fellow students at St. Genevieve School!