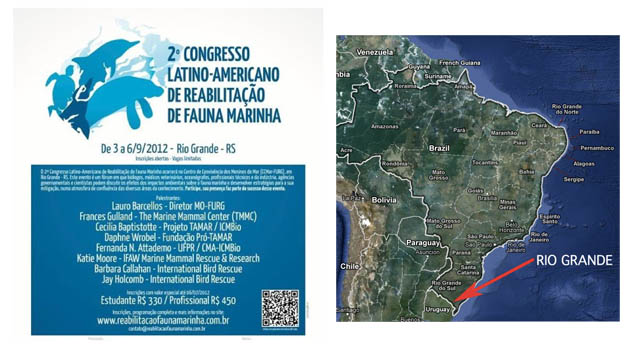 International Bird Rescue’s Jay Holcomb and Barbara Callahan have just returned from the 2nd Annual Latin American Conference on Marine Wildlife Rehabilitation in Rio Grande, Brazil, where they presented on protocols for oiled bird care (Holcomb) and managing large-scale oiled wildlife response (Callahan). Here are some of their parting thoughts from the conference:

Today, it’s clear that climate change and the massive amount of plastics now present in marine environments worldwide are the

greatest threats to all species of seabirds, sea turtles and manatees.

Of course, there are other enduring problems. Coastal development, as well as legal and illegal fishing nets, threaten populations. Penguins and other seabirds are still being threatened by illegal bilge dumping, resulting in chronic oil spills. And in the past, the exploitation of manatees, penguins and sea turtles by hunting and illegal trade was devastating those populations. Yet while these problems persist, the nesting areas for these animals in Latin America are now largely protected.

The real issue remains: We must do something about plastics and other types of ocean pollution. Even while this conference was 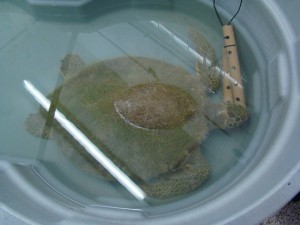 taking place, a sub-adult green sea turtle (pictured left) was admitted into the Center for Rehabilitation of Marine Animals-Fundação Universidade Federal do Rio Grande (CRAM-FURG). The turtle was thought to have been sick for quite some time, because it came in with substantial algal growth on her carapace. This is unusual, because when they’re healthy, turtles swim and forage at such speeds that algal growth doesn’t happen. We can certainly relate, as we receive birds that come in with similar algal rings on their plumage from sitting in the bay and not foraging — normally due to some chronic health issue that is often undetectable.

One of the most impressive talks was by Dr. Daphne Wrobel, who works with the sea turtle protection and rehab organization Fundação Pró-Tamar, located south of Rio. It’s a group worth checking out, as their efforts since the late 1980s have helped ensure the safe hatching and entrance to the sea of 12 million baby turtles — and that’s only one of their accomplishments. 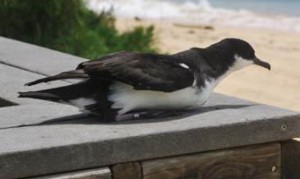 During the conference, we were also able to directly assist a veterinarian from Peru with an annual petrel fall-out there. Each year as petrels fledge, they go to sea but often get confused by the city lights and end up crash landing in urban areas. This is a common occurrence on the Hawaiian island of Kauai. As a result, the Kauai Humane Society has developed a successful program called Save Our Shearwaters, where locals watch out for these stranded birds and bring them into the animal care center. After supportive care, they are relocated to man-made burrows that are appropriate for these birds to re-fledge away from the city lights. This great program boasts a 91% success rate!

Both Jay and I were asked to participate in an afternoon roundtable discussion with Brazilian authorities about wildlife legislation,

since they currently have very few regulations regarding who can handle wildlife and how wildlife should be treated. Our experience, particularly in the last decade, has been that often trustee agencies don’t have any idea how to develop care standards for wildlife. In America, many pioneers in the field, such as Jay and others in our organization, worked together to develop standards that they knew met excellence in animal welfare, as well as ethics. The Brazilian authorities had many questions for us and wanted to understand how minimum standards and best practices came about. In our keynote presentations, Jay and I encouraged the professionals working in the field to develop their own standards so that they were sure to meet animal welfare needs and strong ethics in handling wildlife.

It was a privilege to be a part of these discussions, and I’m sure we’ll see great work continuing in Latin America and many more animals being saved. Obrigada, Brazil!