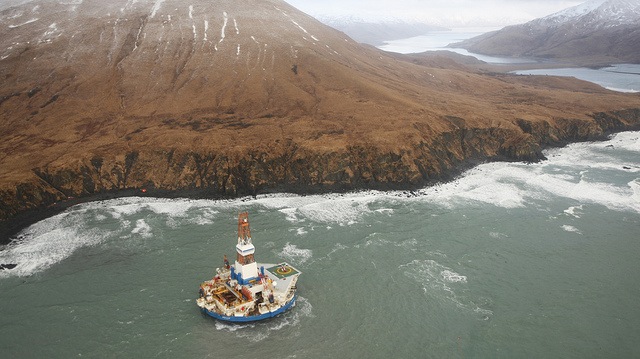 Photo by Judy Patrick via kullukresponse.com

The Kulluk Tow Incident’s Unified Command released the following statement Saturday on preparations to move the drilling vessel, which ran aground off Alaska’s Sitkalidak Island on Dec. 31:

ANCHORAGE, AK – Unified Command (UC) today plans to hook a main tow line to the Kulluk to test capabilities in preparation for recovery operations of the drilling unit. This plan will depend heavily on weather and tidal considerations.

The UC also plans to deploy boom, as a precautionary measure, to Kodiak Island, with special attention being paid to salmon streams connecting to Ocean Bay.

Unified Command has developed a wildlife protection plan to be used in the event that wildlife in the area is impacted during the recovery. They have activated International Bird Rescue to assist in bird rescue programs should their expertise be required. In addition, Protected Species Observers are being deployed on-scene.

As previously stated, all plans rely on weather and tidal conditions.

The Kulluk remains upright and stable with no reports of sheen in the vicinity. Salvage teams conducted an additional survey confirming all fuel tanks remain intact. Throughout all operations the safety of the responders will continue to be the top priority.

Unified Command also released a map of vessels in the vicinity of Kulluk (click here for the full-size map). 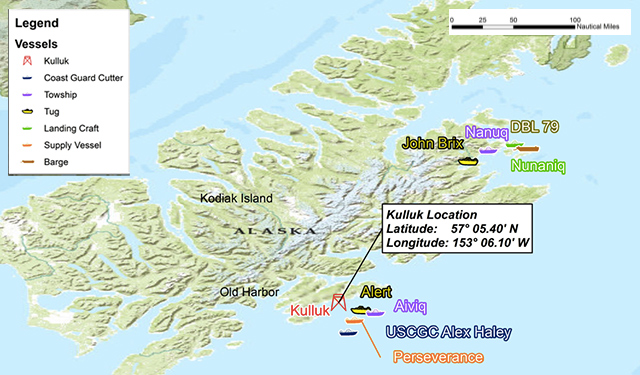