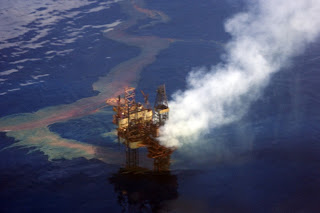 Half way around the world from the San Francisco Bay oil spill, a massive oil leak in Timor Sea, may turn into an ecological disaster if scientists’ warnings are correct.

Gilly Llewellyn, a World Wildlife Federation (WWF) biologist who led a survey team of the spill, is quoted in The Indepedent saying “If the oil were washing up on beaches, there’d be national outrage.”

Since Aug. 21, 2009, an estimated 400 barrels of oil a day have been spilling out of a ruptured drilling rig in a remote area some 155 miles off Western Australian. The company that owns it, PTTEP Australasia, a branch of Thai-owned PTT Exploration and Production Co. Ltd., hasn’t been able to cap the leak. News story﻿

“Oil can be a slow and silent killer … so we can expect this environmental disaster will continue to unfold for years to come,” added Llewellyn. “This is going to have a huge footprint on an amazing part of our marine world, but it may take several years for us to detect.”

Already dead fish drifting have been spotted in Indonesia waters. Several dead birds and sea snakes have been found in oil and may have been killed by the slick, although official tests have yet to determine the deaths.

1 thought on “Massive oil leak in Timor Sea off Australia”