As the mysterious goo that affected seabirds in San Francisco Bay is a little closer to being identified, International Bird Rescue continues to treat affected birds a month after more than 500 hypothermic and dying birds were discovered.

With no responsible party to help with the cost of bird care, International Bird Rescue’s finances are strained. To date, the non-profit organization has spent $150,000 on the response. It continues to rely on public support to help with costs associated with this unusual contaminant response. Donate Now

“We really need the public to step up and support the care of these beautiful seabirds,” said Barbara Callahan, interim executive director of International Bird Rescue.

On Thursday, Feb 12th, state and federal labs concluded that the substance that coated birds includes a mixture of non-petroleum-based fats or oils. Read the full press release from California Department Fish and Wildlife: http://ow.ly/J4bZp

“We are so grateful that the goo has been identified,” said Barbara Callahan. “This was a vexing substance to remove from the birds, but we succeeded even though we couldn’t identify the substance.”

The goo covered the feathers of the seabirds, destroying their ability to stay warm, but no mystery goo was found to be on the beach or in the water, which deepened the mystery.

Each of the birds was medically stabilized and then cleaned using a combination of baking soda and vinegar, followed by washing with Dawn detergent, and rinse to repair waterproofing.

The birds were mainly rescued beginning on January 16, 2015 along the East Bay shoreline from Alameda south to Hayward. All of the live birds came in to IBR’s San Francisco Bay Center in Fairfield, CA.

110 Birds Have Been Returned to the Wild

On Thursday, February 12, six more cleaned birds were released at Fort Baker in Marin County. Included in the release was a Horned Grebe, dubbed “Gummy Bear” by clinic staff. This bird came into care early in the response completely covered in goo. Photo (above) shows before and after cleaning. See “Gummy Bear” video

170 birds were collected dead by California Department of Fish and Wildlife (CDFW) personnel.

The birds that still remain in care are those that entered our San Francisco Bay Center with serious but treatable medical problems. These included severe emaciation, anemia, or injuries.

Many of the rescued birds came to the center with pressure sores to their hocks or toes from being stranded on hard land, and these may take up to 2 or 3 months to treat. Several dozen birds have also had surgeries for keel injuries but most of these healed quickly. Some of these have already been released; others should be ready to go soon.

No new goo-covered, live birds have been found since Thursday, January 22. 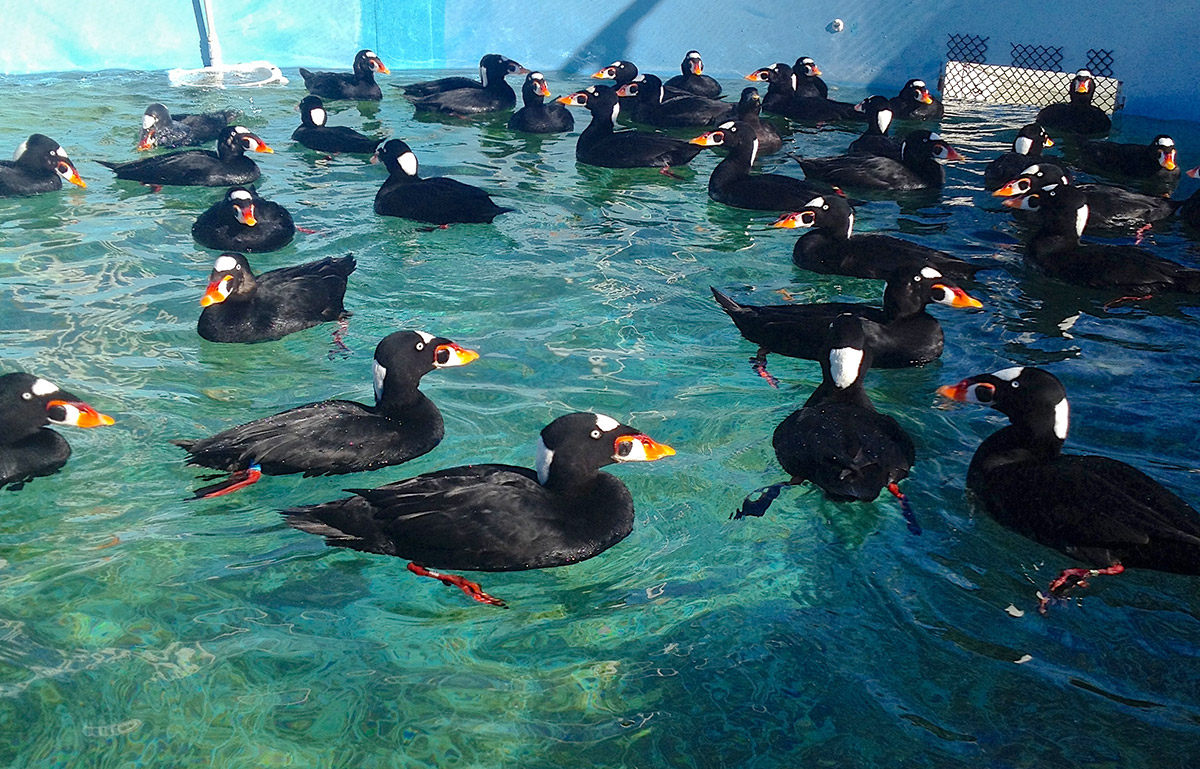