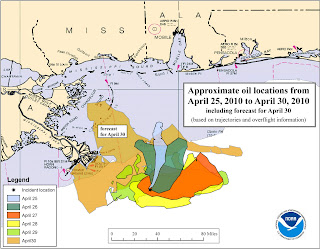 In a new urgent update, officials now are predicting oil from the Gulf of Mexico spill will reach parts of the Louisiana coast today – not Friday as previously reported.

In the declaration of an emergency he issued a short time ago, Louisiana Gov. Bobby Jindal states that:

“National Oceanic and Atmospheric Administration models show the oil spill could reach parts of the Louisiana coastline Thursday, April 29, 2010, and proceed into the Breton Sound and Chandeleur Sound by Saturday, May 1, 2010. At this time, the Pass-a-Loutre Wildlife Management Area is expected to see the first impact of the oil spill.”

The oil spill involves a deepwater drilling platform approximately 50 miles southeast of Venice, Louisiana. An explosion and subsequent fire damaged the rig, which capsized and sank on April 22, after burning for hours. It is unclear how much of the estimated 700,000 gallons (approximately 16,700 barrels) of #2 fuel onboard burned before it sank. The rig is owned by Transocean and under contract to BP.

Today the Coast Guard changed the amount of oil spewing from the uncapped rig to over 200,000 gallons a day.