—Our Blue-Banded Pelican Project is featured in the Malibu Times, with info on the current sighting contest that continues through early January. [Malibu Times]

—The OC Weekly takes a look at migratory visitors in Southern California this time of year, including Yellow-rumped Warblers and White-crowned Sparrows. [OC Weekly]

—Via Agreement on the Conservation of Albatrosses and Petrels: “Wisdom, the now 62-year old Laysan Albatross, is once more back on Sand Island in the 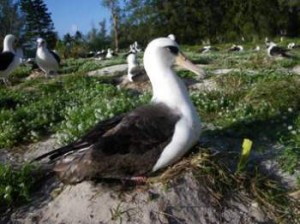 Midway Atoll National Wildlife Refuge and has laid her latest egg, now being incubated by her partner.” [Agreement on the Conservation of Albatrosses and Petrels website; more info and great photos from Midway at the blog Pete at Midway]

—Conservationists consider the potential impact of the Farm Bill on migratory waterfowl habitat in the Upper Midwest. [New York Times]

—In a study published in the Proceedings of the Royal Society B, researchers find that Eurasian Jays have developed strategies to minimize noise while hiding, or “caching” their food supplies to avoid having them stolen by other birds. [New York Times]