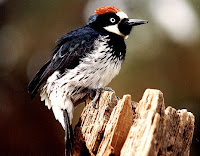 After months of anger with woodpeckers damaging property and causing noise, two Rossmoor homeowner’s associations have voted again to shoot and kill more woodpeckers around its homes.

The homeowners groups received a permit from the U.S. Fish and Wildlife Service last summer to kill up to 50 Acorn Woodpeckers in the hope of driving them away from their neighborhoods. At least 20 woodpeckers have already been killed in an earlier government sanctioned action.

Rossmoor is retirement community, located in Walnut Creek area about 25 miles east of San Francisco, with nearly 9,000 residents in million dollar condominium homes. Its situated in an oaks woodland area that is beloved by lots of creatures.

According to news reports, the Rossmoor residents have spent $170,000 trying to scare the birds away. They’ve used recordings of screeching falcons and hawks. They tacked Mylar to the sides of homes. They even painted homes with a special paint that purports to frighten birds away. The birds still continue to annoy residents.

People from all over the country have called and written asking Rossmoor homeowners to reconsider the last resort of shooting the birds. Even the folks from the Audubon Society’s Mt. Diablo chapter stepped in to offer assistance in humanely scaring the birds away. But late last month they rescinded its offer after the residents voted to begin shooting. Audubon even asked the Fish and Wildlife Service to take away the group’s shooting permit.

More than a few people have pointed out that killing these birds is futile. Another group will move in soon enough. The birds will also continue to store acorns in buildings that have been built too close to open woodlands where trees have been removed for development.

Some have complained that not all deterrents to the birds drilling in buildings has been carried out. Wildlife groups are petitioning politicians and government agencies to stop the killings.

The Acorn Woodpecker are super industrious and will use all types of structures to store acorns. They will drill holes in fence posts, utility poles, buildings, and even automobile radiators. Woodpeckers even stored 485 lbs of acorns into a Arizona wooden water tank. See more on the Cornell University’s All About Birds website

News report: Woodpeckers in a peck of trouble at Rossmoor