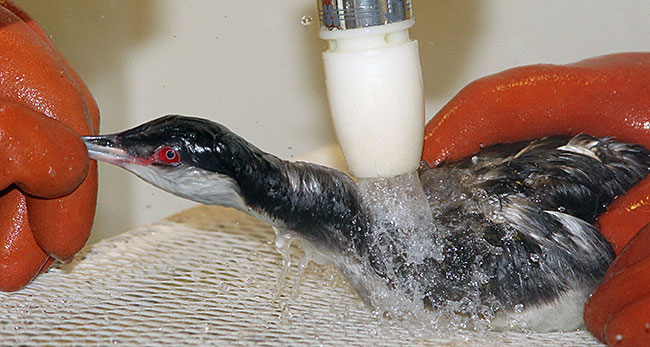 Of the 242 seabirds in care, 55 have been washed of the contaminant. 187 are being stabilized before they can be washed. At least 25 dead birds came to the Bird Rescue’s San Francisco Bay Center located in Fairfield. 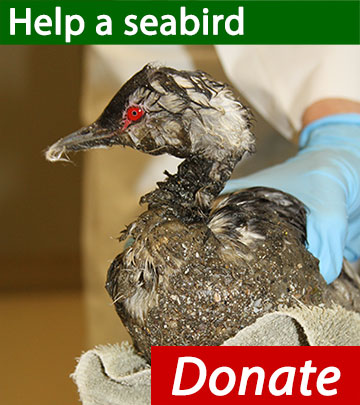 Three search-and-collection teams have found a significant number of seabirds affected by the substance near Bay Farm Island Shoreline Trail in Alameda, in addition to shoreline areas in San Leandro and Hayward.

“Our team anticipates washing between 40 and 60 seabirds on Monday, and we expect many more to be transported to our center,” said International Bird Rescue interim executive director Barbara Callahan.

“The good news is that we have modified our wash protocol and it appears to be working on healthier birds,” Callahan said. “However, some of the birds that have recently arrived are in much poorer condition, likely because they’ve had this substance on their feathers for several days now.”

International Bird Rescue has now set up an online form for public reports of beached birds suspected to be covered in the substance. Members of the public are not advised to collect birds at this time, given the unknown nature of the substance. 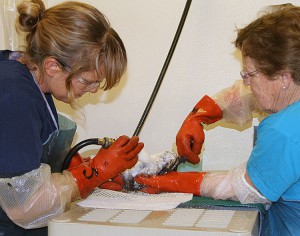 Officials are investigating whether the substance could be polyisobutylene, or PIB, which is sticky, odorless, largely colorless, and killed thousands of seabirds in the U.K. in 2013. “While on its face, this substance seems very similar to reports from the U.K. two years ago, we won’t know definitively until lab tests are completed,” Callahan said.

Surf Scoters, Buffleheads and Horned Grebes continue to be the most commonly affected species.

Because no responsible party for the incident has been identified, International Bird Rescue is currently paying for all costs associated with the event and is seeking the support of the public to care for these birds. Contributions can be made online at birdrescue.org.