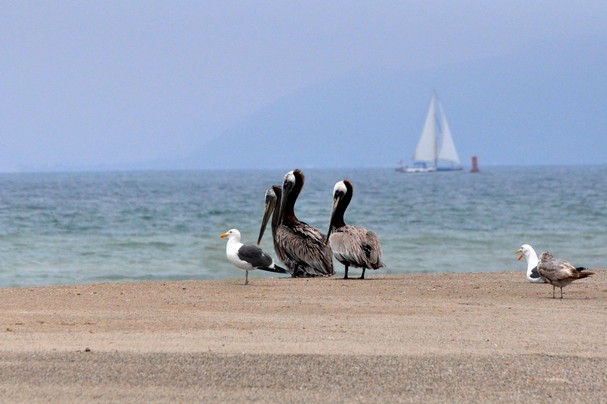 The Ventura County Star reports on numerous Brown Pelicans with slashed pouches and other injuries currently of unknown cause:

Numerous brown pelicans have been injured recently at the Ventura and Channel Islands harbors, prompting volunteers to put up signs advising the public to report animal abuse.

It was unclear, however, whether the injuries were deliberately caused by humans, experts said.

“If nobody sees how a bird was injured, you don’t really know how it happened,” said Julia Parker, director of the Santa Barbara Wildlife Care Network in Goleta. “We can’t have eyes on what happens at sea and in all hours of the day and night.” […]

A brown pelican was rescued Thursday in Ventura with a sliced pouch and will be taken to International Bird Rescue’s Los Angeles center to be sewn up and rehabilitated.

As the newspaper notes, Brown Pelicans are protected under the Migratory Bird Treaty Act. The maximum penalty for harming or killing such a bird is a $15,000 fine and six months in jail. Read the full report with AP contributions here.

International Bird Rescue has worked with slashed-pouch pelicans countless times before. One of the more memorable cases was that of 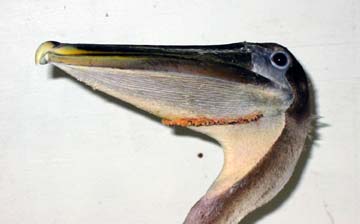 “Slash,” a juvenile female who amazingly endured three surgeries and hundreds of stitches before she was released in 2004, when Brown Pelicans remained on the endangered species list. From our archives:

Found in the Redondo Beach area, her pouch slit from ear to ear, “Slash” spent two months in rehabilitation at International Bird Rescue in San Pedro, [which] has cared for 154 of the endangered birds [in 2004], most starving juveniles who couldn’t find food, but also many with fishing/line hook injures, and some victims of abuse by humans.