Our loyal Facebook fans often pose questions on the intricacies of wildlife rehabilitation and some of the procedures that International Bird Rescue staff has helped pioneer to save injured aquatic birds.

We threw a few recent Q’s over to Dr. Rebecca Duerr, our staff veterinarian. Duerr received her BS in Marine Biology from San Francisco State University and her DVM from the University of California at Davis. Here are her answers:

Q: I thought that broken wing bones in birds were impossible to mend. Aren’t they hollow, so when broken they shatter in tiny pieces that are impossible to put together again?

Duerr: We receive a large number of birds with fractures of every bone imaginable, and successful treatment is very common. Yes, some bird bones tend to be hollow, but no, they do not tend to shatter into an unrepairable mess. If anything, I would say that bird bones are easier to fix than mammal bones because birds heal much faster.

In general, the prognosis of a given fracture depends on the species, which bone is broken, whether it is fresh or old, infected or not, the age of the bird, and many other factors. Joint fractures and old infected fractures carry the worst prognosis, fresh uninfected fractures, the best. So the sooner we are able to treat a broken bird, the better it will likely do. The most common fractures we see are fractures of the ulna (wing), which heal very well with wraps and splints, and leg bone fractures in young herons and egrets, which also do very well in splints but sometimes need surgical pinning depending on which bone it is and whether it is compound.

What species are particularly difficult to work with in captivity?

Each species has its own challenges and common problems. Just like cats and dogs have different typical medical problems from each other, each species of bird has its own issues. But that being said, I would say that loons are probably the most challenging species to deal with in captivity. They are high-stress birds and often enter captivity in extremely poor condition, or even have evidence of chronic health problems such as poor feather quality. Their anatomy is such that they are not built to ever rest on solid land, so when they are not able to be housed in the water they start to develop serious problems right away.

How do you remove fish hooks without further damaging a bird’s esophagus/digestive tract?

Depends on the location of the hook and whether it is already piercing the wall of the GI tract. In every case, removal is easiest if the line is left long and attached to the outside of the bird with no tension on it. Having the line still accessible can mean the difference between an easy removal and major surgery. Tension on the line often means that the esophagus or corners of the mouth will be damaged because a tense line can cut into the tissue like a razor. In cases where X-rays show us that the hook is merely sitting inside the stomach not pierced through the wall, we sometimes use a low-tech method of feeding birds a large amount of cotton wadding to stimulate the bird to regurgitate its stomach contents. 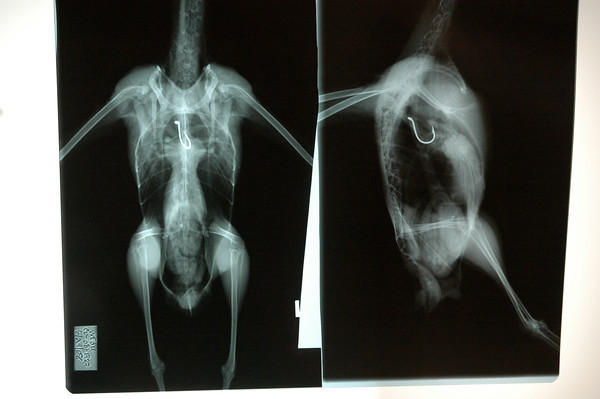 Another low tech option for hook removal that works very well in pelicans is while the bird is under anesthesia, have someone with a small hand and skinny arm reach in there and get it out manually. Unfortunately, I have large hands, too big for any except the biggest male pelicans, so I often talk someone with more delicately sized hands through the procedure. Yes, we wear shoulder-length gloves to do this, as the inside of a pelican stomach is about as gross as you might imagine! Another method of hook removal useful when the line is still accessible is to run the line through a thick piece of tubing and maneuver the tube to get the hook secured onto the end of the tube. This method only works in some species.

As a last resort in removing a hook, I will go in surgically wherever I need to go to access the hook. But the very worst fish hook injuries we see are not generally from ingested hooks, but rather when the hook gets lodged in joints such as the hock or elbow or jaw, or pierce the tendons of the legs. Fish hooks that penetrate these areas tend to cause nasty infections and may result in permanent damage to important structures.

What’s the trickiest type of surgery you perform at International Bird Rescue?

The trickiest surgeries I perform often involve efforts to save toes, particularly when the middle toe on a webbed foot has a serious infection affecting the bones. Removing the whole toe would mean the bird will lose all the webbing on that foot, which would not be okay if the bird needs its webbing to swim. Sometimes birds even come in with severely contaminated infected bones sticking out of their foot.

After talking about this problem with the tiny number of other vets who work with these species, I started doing a procedure we call “bone deletion,” where the toe is essentially partially deboned, but the soft tissue is left behind to heal and maintain the integrity of the webbing. At first I thought this would lead to the bird having floppy webbing, but so far, the birds I have done this to have developed scar type tissue in the toe that stiffens it up as it heals. Getting these to heal well after having a severe infection can be a challenge, but birds’ ability to heal continues to amaze me.