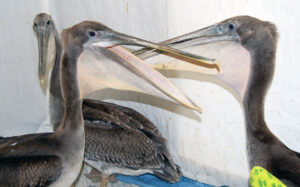 Large numbers of fledgling California Brown Pelicans are flocking to International Bird Rescue. In the last few days we have received over 75 young, weak, and starving pelicans between our Los Angeles and San Francisco Bay Centers. These birds are landing in schoolyards, at restaurants and on highways – sometimes even following people – in an attempt to find food. Why is this happening? It is important to understand a few things about Brown Pelicans in California.

Brown Pelicans begin nesting as early as January on the Channel Islands off of Southern California, the northernmost nesting colony for this species. By April, the fledglings begin to leave their nests to join the adult birds in the ongoing quest for food that takes them up the coast of California. Some years produce low numbers of chicks and some produce many, depending on food availability and the number of successful nesting adults. 2011 appears to be a strong year for chick rearing.

Like all species, pelican populations experience natural selection. It is estimated that up to 80% of the annual chick population will die as part of the natural selection process. The birds that find food on their own have a good chance of surviving while the ones that do not will perish relatively quickly after leaving the nest; the pelicans that our Centers are currently receiving are all starving.

In recent years, the government has announced that the California Brown Pelican population has fully recovered from the impact of the DDT that depleted their population over 50 years ago. They were subsequently removed from the endangered species list, and are considered to be a recovered species. That is a conservation success story, but now, the Brown Pelican is facing different obstacles that challenge its survival. Oil spills, ocean pollution, domoic acid poisoning, climate change and fishing tackle entanglements take countless numbers of these birds. These losses are not a part of natural selection, they are all man-made.

International Bird Rescue receives up to 600 Brown Pelicans annually and 40% of those come to us because of fishing line entanglements. These are just the ones who make it to us, not those who, for example, are lost at sea. Man-made impacts do not naturally select the weaker birds from the population, they hit any creature in their path. Many of the birds entangled in fishing tackle are adult breeding-age birds, and the genetic pool that should secure the future of the species.

We have had sightings of some of the birds rehabilitated at our centers years later, identified by their leg bands. These sightings are significant, as they imply that giving birds a second chance really works. The way we look at it is that we lose many pelicans to the threats like fishing tackle and ocean pollution, but the young birds that are rehabilitated help to fill in the vacant slots of those lost to modern-day threats.

Rehabilitating fledgling pelicans is not difficult, but it is costly. They come to us dehydrated and weak from starvation, but if we can give them a healthy and plentiful diet of fish (from 5 to 10 pounds a day per pelican), and aviaries where they can exercise, bathe and feed, then they thrive. Once they have gained weight back, they are released into a pelican feeding or roosting area where they can continue to learn to hunt for food on their own.

They are then on their own once more – to make it or not.