—A week after it grounded off Alaska’s Sitkalidak Island, the Royal Dutch Shell Kulluk drilling vessel was successfully refloated and towed to safe harbor in Kiliuda Bay. Inspectors will investigate whether repairs of the vessel are needed. 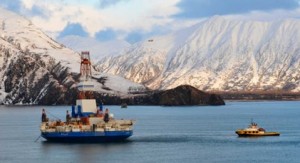 discharge resulting from the incident). The area is home to a large population of Common Murres as well as other seabirds. [Anchorage Daily News]

—Meanwhile, wildlife lovers in the Bay Area are breathing a sigh of relief after an empty oil tanker swiped a tower of the San Francisco-Oakland Bay Bridge. Unlike the 2007 Cosco Busan disaster, Monday’s incident did not result in an oil spill. “We all responded assuming this was going to be another episode of what we saw with the last spill,” Kelly Huston, the spokesman for the California Emergency Management Agency, told the San Francisco Chronicle. “There was some confusion in the last one, and we’ve had incidents where the coordination wasn’t as good. Since then there have been a lot of changes.” [SF Chronicle]

We recently looked back at the Cosco Busan spill of 2007, click here for an infographic about the spill’s effects on Bay Area birds.

—Birds respond remarkably similar to birdsong as humans to do music, Donna Maney, an Emory University neuroscientist and co-author of a new study published in Frontiers in Evolutionary Neuroscience, explains in an interview with NYT. The study used birdsong response in White-throated Sparrows. [New York Times]

—A recent Bird Fact of the Day via International Bird Rescue on Twitter: